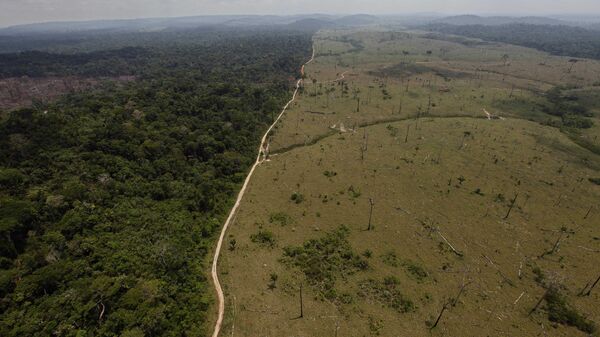 © AP Photo / Andre Penner, File
Subscribe
International
India
Africa
Oil-rich Norway, which in many parts of the world emerged as the champion of wildlife preservation, is threatening to cut its support of the Amazon rainforest amid Brazil's defiant underperformance and wide-spreading deforestation.

Norway Entices Muslims With 'Premium Water' From Pristine Arctic Archipelago
Norwegian Climate and Environment Minister Vidar Helgesen is now in Brazil and the atmosphere of his visit is far from relaxed, for it's not a courtesy visit that brought him to Rio, but rather bad news.

Over the past year, deforestation of the Amazon basin has increased dramatically, by around 30 percent. Much of the precious rainforest in Brazil is felled and burned down to make room for soya plantations and cattle ranching. In the course of the past decade, Norway has been a generous contributor to Brazilian conservation efforts, and it is expecting results for its pretty penny.

"This is not a trend that should be allowed to continue, because Brazil's rainforests are the world's largest and are of great significance for the world's climate," Vidar Helgesen told Norwegian national broadcaster NRK commenting his visit to BNDES, the Brazilian bank that manages the Norwegian-sponsored Amazon Fund.

Green Thumbs Up! Norway to Pioneer Electric Jets in Arctic
Norway is ringing the alarm over the distressing perspectives of Amazonia in light of the powerful development of Brazil's industrial agriculture, sinking its teeth deeper into the pristine rainforest. Brazilia's failure to live up to its commitments may prove costly for conservation efforts, which are largely funded by Norway.

"We have a performance-based approach. And that means that we are paying for results when it comes to stopping deforestation. And with no results, there won't be much money to rely upon," Vidar Helgesen told NRK.

Meanwhile, deforestation in the Amazon region has increased so sharply that even the Amazon Fund itself is in despair over the recent developments.

"We are working hard to save the rainforest, and we have initiated many projects to get residents of the Amazon region to start alternative businesses that do not damage the forest. But after years of progress we are now seeing a negative development that we must stop at all costs," Amazon Fund manager Juliana Santiago said.

Science & Tech
Dig It! Norway to Blast World's First Ship Tunnel Through Solid Rock
For years, the struggle for the Amazon rainforest, dubbed "the world's lungs," seemed to carry on in the right direction. From 2004 to 2014 deforestation decreased by 70 percent. When Brazil started the Amazon Fund in 2008, Norway responded with a lavish donation of $1 billion in an attempt to reverse the deforestation trend by encouraging the private sector to take greater responsibility. Additionally, Norway also took the initiative to create the so-called Tropical Forest Alliance, working for increased awareness.

The Amazon rainforest covers most of the Amazon basin of South America, encompassing 7,000,000 square kilometers. The majority of the forest is contained within Brazil. Amazonia represents over half of the Earth's remaining rainforests with an estimated 390 billion individual trees divided into 16,000 species.

Norway has been recognized as one of the world leaders in global anti-deforestation efforts, investing over $2.5 billion into conservation commitments since 2007. Brazil, Indonesia, Peru, Guyana and Congo basin nations in Africa have all been major grant recipients.