Dijsselbloem Not 'Fit to Be President' of Eurozone After 'Shameful' Remarks 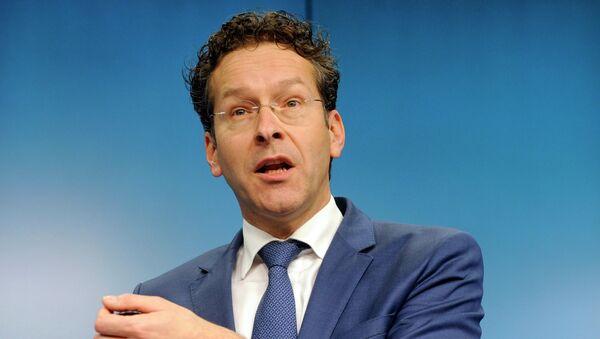 © REUTERS / Eric Vidal
Subscribe
MEPs have called for the president of the eurozone Jeroen Dijsselbloem to consider his position after an outcry over his suggestion that southern members spend their money on "drinks and women" further opening a rift between the north and south of the single currency area within the EU.

There was outrage when Dijsselbloem gave an interview to a German newspaper in which he suggested that the southern — mainly Mediterranean — eurozone members, who are struggling to remain within the fiscal rules of the currency, were wasting money.

​His comments immediately drew harsh criticism for the leader of the Socialists and Democrats group within the European Parliament, Gianni Pittella.

"Dijsselbloem's words are shameful. How can someone who expresses such beliefs be fit to be the Eurogroup president? It is not the first time Jeroen Dijsselbloem expresses opinions, economic and political stances which are openly in contradiction with the line of the European progressive family," Pitella said.

"Now with his shameful and shocking words in an interview to Frankfurter Allgemeine Zeitung, Dijsselbloem went far beyond by using discriminatory arguments against the countries of southern Europe. There is no excuse or reason for using such language, especially from someone who is supposed to be a progressive. I truly wonder whether a person who has these beliefs can still be considered fit to be president of the Eurogroup."

The Prime Minister of Portugal — which is itself struggling with austerity measures and failing to meet EU debt targets — Antonio Costa called for Dijsselbloem to be fired.

"In a serious Europe at this stage, Dijsselbloem would have been fired. These statements are unacceptable," he said.

Still from @antoniocostapm, a couple of minutes ago, talking to the press about @J_Dijsselbloem, with very strong words 🇵🇹 🇪🇺 #Dijsselbloem pic.twitter.com/IVY3zeecMW

​One of the central principles of the Stability and Growth Pact (SGP) is that countries must not run an annual budget deficit – the difference between its income and its spending each year – of more than three percent of its GDP.

Both Spain and Portugal are in breach of the SGP, triggering the warning from the Commission, which will lead to a fine of 0.2 percent of GDP. Spain's deficit hit 5.1 percent in 2015, while Portugal's is believed to have been 4.2 percent. Although threatened with a fine for being in breach of the SGP, neither was, after Brussels decided it would give rise to further anti-EU sentiment in Europe.

Taken together with the Greek third bailout – the subject of disagreement between its creditors – as well as economic difficulties in Italy and Portugal, it is all a sign of the dysfunctionality of the single currency, because of a north-south divide in the economies of the member states.