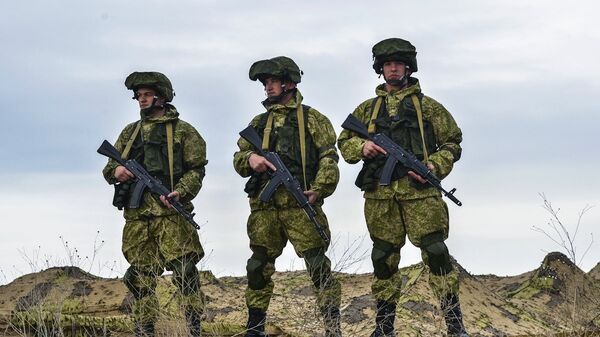 The Russian military has launched a large-scale exercise at the Opuk training range, in Crimea. The drills involved the Russian Airborne Forces, the Black Sea Fleet and the Aerospace Forces.

Russian Airborne Forces Launch Drills in Crimea - Commander
Airborne Forces commander Col. Gen. Andrei Serdyukov told reporters that the drills involved over 2,500 airborne personnel and some 600 units of military hardware. Troops involved in the exercise were deployed to the peninsula by air, sea and railway on March 13-19.

"For the first time in the history of the Russian Army within the framework of Airborne Forces exercises, three of our divisions were simultaneously alerted and partially deployed in Crimea with authorized weapons and materiel," Serdyukov said.

The commander also said that during the drills airborne units are expected to practice anti-landing defense measures together with personnel of the Black Sea Fleet. They will also destroy simulated enemy inland positions and will secure Crimea’s "important frontiers" and areas.

Serdyukov also said that the main reason behind such a massive exercise in Crimea is the increased terrorist threat. He added that airborne units would also practice "resolving crisis situation in different parts of the world."

According to member of the Crimean regional parliament Vladislav Ganzhara, such a threat really exists.

"The threat is pretty much real. Last summer, Ukrainian sabotage groups planned terrorist attacks in Crimea. They were foiled by the Russian Federal Security Service.  Moreover, taking into account Kiev’s hostile rhetoric towards Crimea, such drills are reasonable and necessary," Ganzhara said in an interview with Radio Sputnik.

According to the lawmaker, the drills will also enhance the atmosphere of security in the peninsula.

"Crimea is very close to Ukraine where a military conflict is going on. Russia is conducting military drills on its own land and Crimea residents feel much safer. In terms of defensive capabilities, Crimea today is an outstanding region. It is Russia’s unsinkable aircraft carrier in the Black Sea," the lawmaker said.