How David Rockefeller's Death May Affect the Banking Clan's Positions 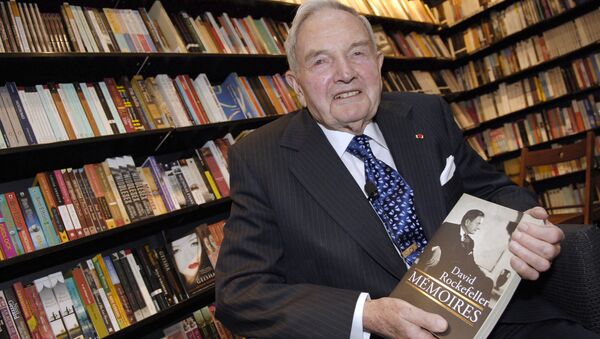 David Rockefeller's passing may weaken the banking clan positions, Valentin Katasonov, a professor at the Moscow State Institute for International Relations (MGIMO), suggested in an interview with Radio Sputnik.

"David Rockefeller for many decades had been the symbol of the Rockefeller clan's financial empire," Katasonov said, "The Rockefeller Empire includes the oil business, the military-industrial complex, and Wall Street banks."

Billionaire David Rockefeller Dies at Age 101
"So it is really a symbol of the financial and economic power of the United States, although today the Rockefellers' positions may not be as monopolistic as they were in the first post-war decades," he added.

According to the Russian academic the Rockefellers could be compared with yet another powerful banking clan — the Rothschilds.

"Many conspiracy theories, many political concepts have been built on the perception of world affairs as the struggle between the two giant clans," Katasonov remarked.

"Perhaps, David Rockefeller's departure from life is rather symbolic; it could potentially result in the weakening of the positions the financial group had enjoyed for decades," he assumed.

Top Dems' Lobbyists Giving Money to Clinton Team Have Ties to Russia - Reports
David Rockefeller passed away on March 20 at the age of 101, the David Rockefeller Fund's official statement said.

The last surviving grandson of John Davidson Rockefeller — the co-founder of the Standard Oil Company and the first dollar billionaire in the history of the US — was born on June 12, 1915, in New York.

During the Second World War he worked for US military intelligence in North Africa and France.

Twenty years later, in 1981 he resigned and in 1989 he and his wife Peggy founded the famous David Rockefeller Fund.

"In 2001, David Rockefeller expanded the Fund and invited his children and grandchildren and their spouses to take a more active role in the Fund with the idea of transferring to them the family's philanthropic tradition," the Fund's official website reads.

Commenting on Rockefeller's death, former President George H.W. Bush noted that he was "deeply saddened" and praised him as a valuable adviser to both Republican and Democratic presidents of the United States.

"David Rockefeller was a consummate businessman, a great humanitarian, and a serious scholar," former US President Bill Clinton said in a statement, "Hillary and I are grateful for his friendship and his remarkable life."

Rockefeller was known as a convinced globalist and a neo-conservative ideologist. For many years he took part in the meetings of the Bilderberg Club, an annual private conference of European and North American political elites.

According to Forbes' real-time billionaire rankings, at the time of his death Rockefeller was worth an estimated $3.3 billion, which had made him the planet's 604th richest person.