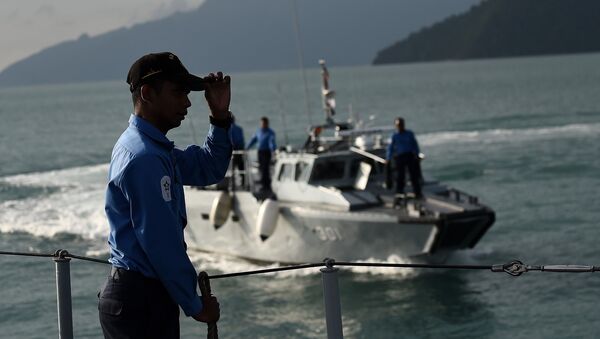 IHS Janes Defense Weekly reported in December that $250 billion in defense funds are expected to go to the Asia Pacific region between 2016 and 2020, and even with a shrinking budget Kuala Lumpur hopes to expand its capacity alongside its neighbors.

The Malaysian defense budget has been cut by 12.7 percent this year to $3.41 billion, and the country has already acquired four littoral mission ships (LMS) built cooperatively with China as the first step toward replacing their aging fleet of 50 vessels.

Ahmad Kamarulzaman Ahmad Badaruddin, chief of the Malaysian Navy said, "The LMS are designed for many aspects of maritime security such as dealing with cross-border crime, piracy, anti-terrorism and search and rescue operations … These ships would be very capable of dealing with the threat posed by Daesh and other maritime security concerns."

The LMS deal with Beijing, first announced in November, is expected to be solidified this week at the Langkawi International Maritime and Aerospace Exhibition (LIMA). Apart from the four ships, Malaysia hopes to receive the technology necessary to construct more vessels domestically.

This year’s LIMA will feature over 500 exhibitors from 36 countries. The exhibition takes place on the duty-free island of Langkawi every two years.

According to Kamarulzaman, Malaysia is also close to finalizing a deal with DCNS, a French shipbuilder, to institute a littoral combat ship (LCS) building program, with the official announcement set to come in August or September.

Nations throughout the region are beefing up their naval powers as tensions escalate in the South China Sea, with some nations, including the US, put on edge by the presence of artificial islands made by Beijing.

Malasyia, Brunei, Taiwan, the Philippines and Vietnam all have overlapping claims in the resource-rich region, where $5 trillion in maritime trade passes every year.

Defense spending for Indonesia has increased to 26 percent under President Joko Widodo, while Thailand’s military just approved a $389.05 million submarine deal with Beijing last month a year after putting the deal on hold.

Shahriman Lockman, a senior analyst with the Institute of Strategic and International Studies based in Kuala Lumpur said that if the Association of Southeast Asian Nations (ASEAN) members wants the best value for its military investments, the countries must share intelligence.

Shahriman said, "We're talking military patrol aircraft, radars, drones… and in bigger numbers. Quantity is a quality of its own. It doesn't make sense to aspire to top-of-the-range equipment but in small number … Equipment that contributes to maritime domain awareness ought to be the priority for all. You can't fight what you can't see."