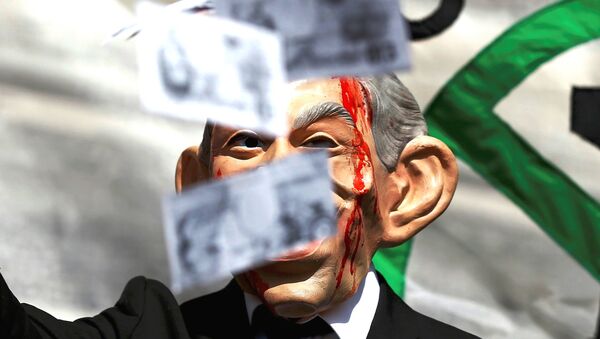 John Wight
All materials
The months leading up to the war in Iraq, unleashed on 20 March 2003, saw the very best of humanity engaged in a struggle with the very worst for the right to shape the future.

When it comes to the very best of humanity, we are talking an anti-war movement that for a brief moment grew so large, powerful and determined that the New York Times described it as a second superpower on its front page. It did so in response to the momentous international protest that took place on February 15, 2003, when between 12-15 million people took to the streets of cities and towns across the globe to demand an end to a drive to war, which by then looked well nigh unstoppable. It was a time of hope, anger, passion, anguish, and solidarity, a potent cocktail of emotions in a period when those involved in this historic global movement allowed themselves to believe that another world truly was possible. 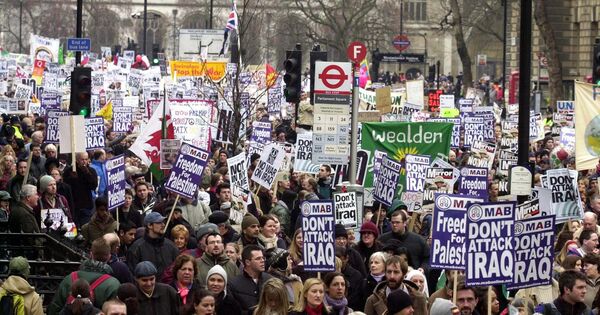 Demonstrators at the rally in London, 15 February 2003, as worldwide protests brought tens of thousands into the streets to show their opposition to a possible US-led war against Iraq.
© AFP 2022 / Martyn Hayhow

The supposed failure of the anti-war movement to stop the war, despite organizing some of the largest demonstrations the world has seen, was in fact a failure of democracy on the part of governments and leaders whose messianic belief in their right to destroy a country in order to save it constituted a crime that will follow them to their graves.

George W. Bush and Tony Blair, president of the United States and British prime minister respectively, were the authors of a war of aggression against a country and a people who had been systematically starved by dint of thirteen years of the most extreme and savage economic sanctions ever known. Yet despite the inordinate suffering endured by Iraqi people as a result of those sanctions, Bush and Blair proceeded to unleash war on their country with the grotesque claim that they did so as liberators not conquerors.

That Iraq and its leader, Saddam Hussein, had absolutely nothing to do with the awful events of 9/11 did not matter. And neither did the fact that he did not possess the stockpiles of weapons of mass destruction (WMD) they claimed. They of course knew this; and what is more, the world knew that they knew. It knew the war had nothing to do with security and everything to do with regime change. 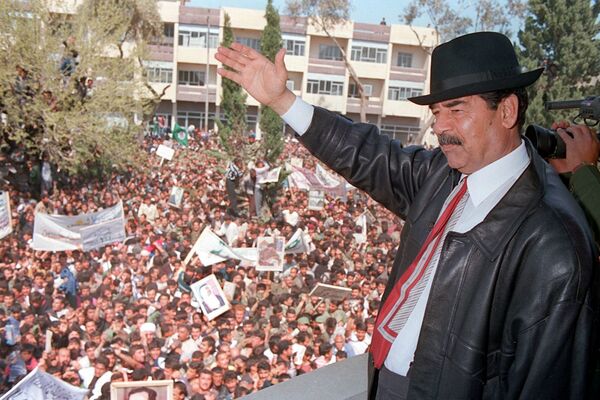 The war on Iraq ripped the mask of democracy from both the US and its British ally to reveal hubris and mendacity. The moral sickness of regime change, added to a cultural attachment to the verities of white man's burden, produced a messianic drive to reshape the world according to the image cooked up by a group of crazed neocons in Washington, along with a British prime minister obsessed with establishing a Churchillian legacy for himself.

They succeeded in sowing chaos and carnage on a biblical scale, which rather than destroy terrorism spawned its growth to a scale unimaginable.

British journalist Jonathan Steele, in his book, Defeat: Why They Lost Iraq, recounts an exchange he had with former Jordanian ambassador to the UN, Adnan Abu Odeh, just as US military forces were about to enter Baghdad in April 2001.

"What's going on in Iraq now recalls 1258 when the Mongols entered Baghdad. It's also like Britain's arrival in Baghdad in 1918. Iraq had the first civilisation in history which domesticated animals and sowed plants for agriculture. Now it's being re-colonised for the second time. We see a new type of colonisation with a transformed mission. In the past it was guns, ships, and priests. Now it's guns and the gift of democracy," Odeh told him.

The war and ensuing occupation of Iraq ended in military defeat for Washington and London. Instead of advancing the cause of Western liberal democracy it exposed it as organized hypocrisy. But that being said, this war was never about democracy. It was about seizing control of a major oil producing state in the heart of a region long considered the rightful property of the self-appointed rulers of the world. As Michael Macdonald writes, "The United States went to war — and failed to win the war — because regime-changers deluded themselves into believing they were the world and the world was better for it."

Perhaps the last word, attributed to him by the Roman historian Tacitus, should go to the legendary Caledonian (Scottish) warrior-chief Calgacus during his address to his men prior to going out to meet the Romans at the Battle of Mons Graupius in present-day northern Scotland around 83AD.

"If their enemies have wealth they want it; if they're poor, it makes no difference, they still hunger for power. Nowhere, east or west, is enough for them — they're the only ones who lust after everything alike, rich or poor.  Abduction, massacre, plunder they misname 'law and order.' Where they make a desert they call it 'peace.' "