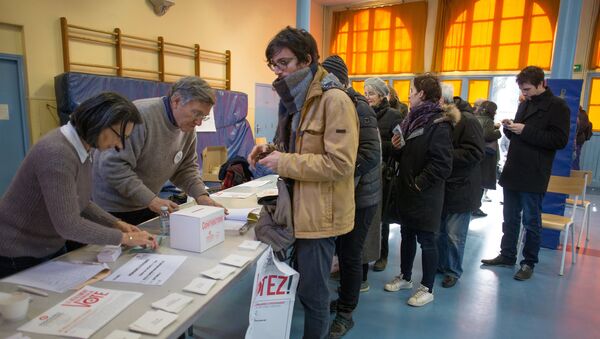 'Political Suicide': Poland Unlikely to Have Referendum on Leaving EU
MOSCOW (Sputnik) — France needs to push for social and economic reforms to prevent nationalists from capitalizing on voters’ fears of a tighter European Union, a German state minister in charge of EU affairs said Tuesday.

"It is in our interest that our closest EU partner regains political, cultural, social and economic stability and strength," Foreign Ministry’s Michael Roth told the Suedwestrundfunk (SWR) radio.

He said the European Union was a guarantee against crises' and it would be "madness" for France to wall itself off in the manner French presidential candidate Le Pen has been campaigning for.

EU Acceptance of Turkish Referendum's 'No' Vote Supporters Biased - Ankara
Roth admitted Europeans expected the union to be more of a solution than a problem in matters of overly tough EU regulations and budget policies.

"We must take political costs of our actions into account. When a policy we advocate helps Marine Le Pen become president, I don’t want to bear responsibility for this," the minister said.

He praised pro-EU candidate Emmanuel Macron’s performance in the recent presidential debate and described him as a staunch European but stopped short of openly calling for support for him.

Roth, who is Berlin’s commissioner for German-French cooperation, admitted German politicians had been "a bit arrogant" and condescending in their approach to France and only boosted Le Pen’s campaign.