Trump Pledged to Speed Up Support for Iraqi Government Against Daesh 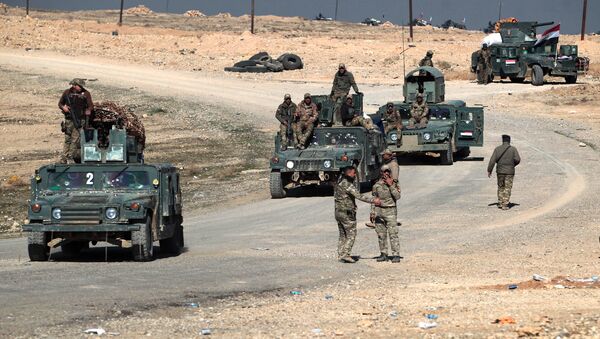 © AFP 2021 / AHMAD AL-RUBAYE
Subscribe
Iraqi Prime Minister Haider Abadi said that Donald Trump and his top officials have agreed to speed up US support for the Iraqi government in its ongoing battle against Daesh.

Iraqi Prime Minister Calls on Trump to Review US Immigration Order
WASHINGTON (Sputnik) — President Donald Trump and his top officials have agreed to speed up US support for the Iraqi government in its ongoing battle against the Islamic State (Daesh) terror group, Iraqi Prime Minister Haider Abadi said.

"We have been given assurances the support will not only continue but will accelerate," Abadi said after meeting with Trump at the White House on Monday. "We are happy with the meeting… Working together I think we can be successful."

Abadi said Trump and other senior officials had expressed clear support for the Iraqi government and its policies.

"We see an administration and a president who appreciate what we are doing and we have seen plenty of that… The president recognizes the importance of Iraq," he said in a meeting at the US Institute of Peace.

"I think this administration wants to be more engaged in fighting terrorism," Abadi said. "I think they're prepared to do more to fight terrorism."

However, Abadi also cautioned that he did not expect Trump to increase the number of US ground forces deployed in Iraq.

"Committing troops is one thing while fighting terrorism is another thing… Terrorism you don't defeat it by military force only: There are better ways and I think we can do it," he said.

Abadi said he did not believe US public opinion would currently permit any significant increase in the number of ground forces deployed to fighting terrorism in the Middle East region.

In his election campaign Trump repeatedly criticized his predecessor President Barack Obama for allegedly not prosecuting the campaign to totally destroy Daesh with sufficient vigor and determination.