US, Russia Should Cooperate to Tackle North Korean Threat - Congressman 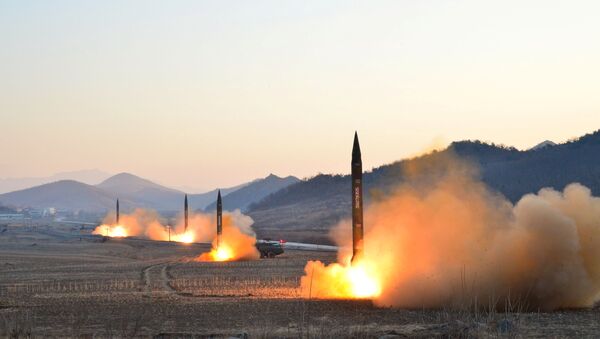 © REUTERS / KCNA
Subscribe
International
India
Africa
The United States and Russia should work together on addressing the nuclear threat posed by Pyongyang, US Congressman Joe Wilson told Sputnik on Monday.

"Every avenue should be taken to stop the development of nuclear ICBM [intercontinental ballistic missile] capabilities of North Korea," the lawmaker said. "It's a threat to America, but it's also a threat to the Russian Federation."

US Ambassador to the United Nations Nikki Haley said earlier in March that the United States did not want to get back into the six-party talks on the North Korean nuclear program. State Secretary Rex Tillerson said on the following day that the US policy of strategic patience toward North Korea reached its limit.

Russia, Japan Agree to Put Pressure on N Korea to Refrain From Provocations
In October 2016, Russian Ambassador to China Andrey Denisov said that there were no prospects for the revival of the six-party talks on the North Korean nuclear program. He stressed that five-party talks without North Korea were unlikely to yield a result.

The talks were launched in 2003 and aimed at ending Pyongyang’s nuclear program via negotiations involving Russia, the United States, China, Japan, North Korea and South Korea.

The negotiations reached a stalemate when North Korea withdrew from the talks in 2009.

Since the beginning of 2016, Pyongyang carried out a number of missile launches and nuclear tests, with the latest being the launch of four missiles in the direction of the Sea of Japan, conducted on March 6, 2017, prompting escalation of tensions on the peninsula.