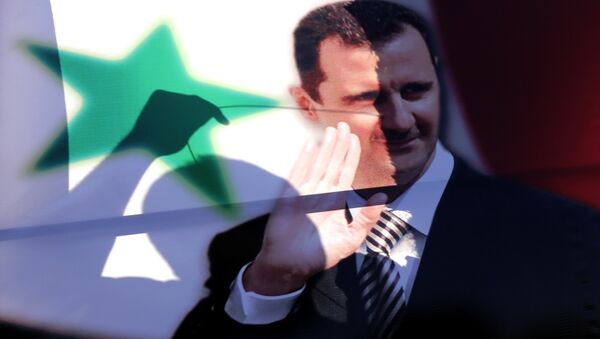 Syrian President Bashar Assad told Russian journalists that he is confident Damascus will receive additional military assistance from Russia if it is required to fight terrorism, but so far the current level of support is sufficient.

DAMASCUS (Sputnik) — Since September 2015, Russia has been conduting an anti-terror aerial campaign in Syria at the request of Assad.

"For this stage, the Russian support by air raids was enough for the Syrian Army to advance on different fronts, mainly in Aleppo and Palmyra as you know. I'm sure that if the Syrian and the Russian officials and military officials feel that we need more support to defeat the terrorists, they're going to do it, but till this moment, the level of support is good and effective," Assad said when asked if Syria would ask Russia for more support.

Russia provided substantial assistance to Syria in yet another liberation of Palmyra, Assad added.

"Usually we don't speak about military issues, but there was important support on the ground, but I don't have to tell you the details of that kind of support," Assad told reporters answering the question on the role of Russia in the recent operation in Palmyra.

Syrian Troops Gain Full Control of Key Mountain Range East of Palmyra
He added that the city suffered additional damage that is yet to be evaluated.

"I think [Palmyra restoration] not only about Syria and Russia; it's about the UNESCO, it's about the other institutions, and it's about other countries that they always claim that they are worried about the human heritage and human culture and so on," the president added.

"It's not only Syrian heritage; it's international heritage, and I think the whole world should be worried about the destruction of Palmyra," Assad concluded.

On March 2, the Syrian army backed by the Russian military aircraft operating in Syria regained control over Palmyra.

"Yesterday, I think, our representative in the United Nations, Mr. [Bashar] Jaafari, announced that we support the Russian initiatives — different initiatives, not only this one — as headlines, and now we are discussing with the Russians the details," Assad said.

World
Moscow's Support for Assad 'Indicates Russia Serious' About Fighting Terrorism
"The problem is that we went to Astana recently, as you know, the other delegation, the delegation of the militants, didn't join that meeting, they didn't go to Astana, and we all believe that this is the negative influence of the Turks. So, how can we start something concrete if you don't have a partner?" he said.