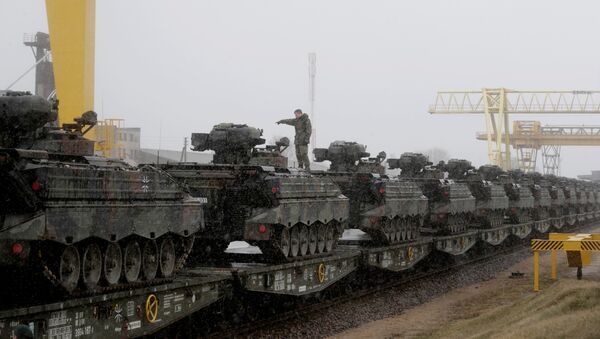 "This is another attempt to show that NATO will now provide its own security by deploying additional forces, thus relying on force… This is completely futile, as any attempts to strengthen the eastern flank, pump weapons into it, will only deteriorate regional security," Grushko said in an interview.

The same outcome will be observed as NATO boosts military presence both in the Black and Baltic sea regions, he added.

NATO has been boosting its military presence in Europe, particularly in Eastern European states, since the outbreak of the Ukrainian crisis, citing Russia's alleged interference in the internal conflict as justification for the move. Steps were taken in this regard during last year's summit in Warsaw, when a decision to deploy four multinational battalions to Estonia, Latvia, Lithuania and Poland was announced, as well as during February's ministerial meeting, when the alliance decided to boost naval presence in the Black Sea.

Moscow Receiving Signals on NATO-Russia Dialogue Resumption - Russian Envoy
Moscow has repeatedly denied the allegations of involvement in Ukraine that have not been supported by factual evidence, also warning that amassing troops and military equipment on its borders is provocative, violates past NATO pledges, and can lead to regional and global destabilization.

"All the last large operations of the alliance ended with catastrophic consequences," Grushko said.

NATO in Black Sea: French La Fayette Frigate Sailing to Bulgaria
He added that the operations in former Yugoslavia, Afghanistan, Libya and Iraq could sever as examples.

"We are still feeling the consequences of the bombing of Yugoslavia in 1999. In Afghanistan, by the way, the situation is not improving, although NATO has been there along with other members of the coalition for almost 12 years. Well, the consequences of an air operation in Libya go without saying. In addition, many [NATO] countries participated in the intervention in Iraq," the envoy said.

NATO is currently leading operation in Afghanistan, Kosovo, the Mediterranean Sea and conducting air policing in the Baltic states among others