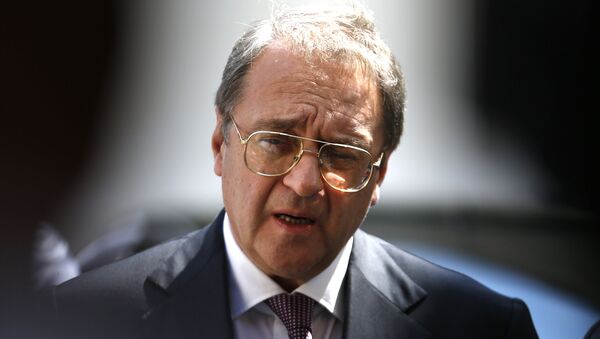 © AFP 2021 / ABBAS MOMANI
Subscribe
Russia’s Deputy Minister of Foreign Affairs Mikhail Bogdanov says that Russia does not support any particular party to the Libyan conflict, maintaining dialogue with all sides.

"We do not support any particular Libyan party [to the conflict]. We stand for all Libyan parties negotiating and defining the necessary principles of maintaining the integrity of their territory, development and stability," Bogdanov said.

According to the Russian diplomat, Moscow maintains the dialogue with all the major parties to the Libyan conflict, such as parliamentary speaker Aguila Saleh Issa, Libyan National Army Commander Khalifa Belqasim Haftar, Prime Minister of the Libyan Government of National Accord Fayez Sarraj and representatives of other political forces.

Libya has been suffering from a civil war since 2011 when long-time leader Muammar Gaddafi was overthrown. The country’s eastern regions are governed by the elected parliament headquartered in the city of Tobruk. Besides, the Government of National Accord, formed with the support from the United Nations and Europe and headed by Sarraj, operates on the country’s west, including the Libyan capital of Tripoli.

The eastern authorities act independently from the west, cooperating with the National Army led by Haftar, which fights against Islamic terrorists.