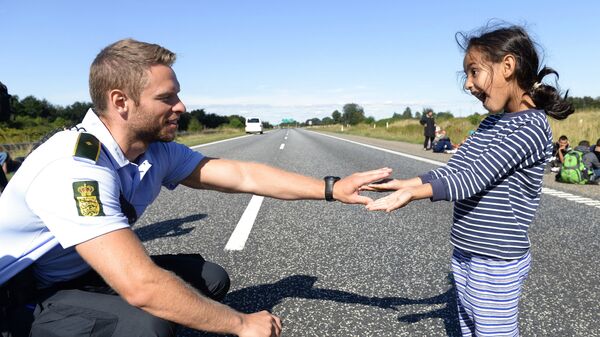 Denmark Under Fire for Keeping Unspent Refugee Money
Of the 61,614 children born in Denmark in 2016, more than one fifth was born to immigrant parents. So far, Danish women are still in the lead as regards births in Denmark, yet the percentage of Syrian and Turkish mothers was found to be rising during the past decade. In 2007, the share of children born to immigrant families was only 13.5.

The rising proportion of children born to women with foreign backgrounds did not surprise Hans Oluf Hansen, professor emeritus of demography at Copenhagen University. He pointed out that the majority of the Syrian refugees who came to Denmark in recent years are just in fertile age. Also, the newcomers tend to be much more prolific than ethnic Danes, whose fertility rate hovers at around 1.7 births per woman despite the government's perennial efforts.

According to Poul Christian Matthiessen, population researcher and professor emeritus of demography at Copenhagen University, such developments will shape the Danish society in years to come. Matthiessen expects immigration to Europe to continue, not least from asylum seekers looking for better living conditions. Matthiessen called immigration from non-Western countries a particular challenge for Danish society, both economically and culturally.

"The annual economic burden on society from non-Western immigrants and their descendants amounts to 15-20 billion DKK [$2.2 —2.9bln], which is equivalent to 1 percent of the GDP. There is a great difference between their contribution, and what they receive from society in the form of grants or teaching," Poul Christian Matthiessen told the Danish newspaper Kristeligt Dagblad.

"The other problem is purely cultural, especially with part of the Muslim population who have a different view of relations between men and women, freedom of expression and how the society must be organized with the help from the Quran, whereas Denmark is a secular society, where parliament decides without referring to holy scriptures," Poul Christian Matthiessen said.

Historian and professor emeritus from Copenhagen University Henrik Jensen concurred about the challenges that immigration is posing.

"It puts a strain on integration efforts, if you want to maintain certain continuity in the country. One must strive to make it work for all groups in society, especially for those coming from outside, and emphasize that they integrate themselves, build a relationship with the country and the language, get education and work. If instead the tendency for parallel societies continues, it affects the cohesion in society," Henrik Jensen said.

In 1980, there were 50,000 non-Western immigrants and their descendants, which accounted for one percent of Denmark's population. Today, the number exceeds 450,000 and thus constitutes eight percent. According to the latest projections from Statistics Denmark, in 2060 there will be at least 900,000 non-Western immigrants, who will represent more than 13 percent of the Danish population.