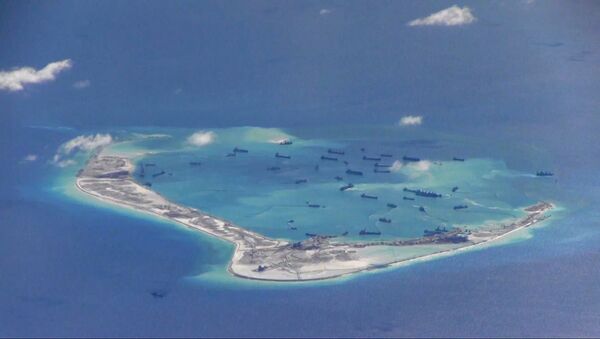 © REUTERS / U.S. Navy/Handout
Subscribe
Senators Marco Rubio and Ben Cardin on Wednesday introduced a bipartisan bill that would penalize Chinese individuals and organizations participating in the construction of artificial islands in the disputed South China Sea.

Rubio, who is a member of the Senate Foreign Relations Committee and its East Asia and the Pacific Subcommittee, said he hoped sanctions against assertive China would serve as a message for Beijing that it could not continue to "fragrantly violate international norms" and expect to not be held accountable.

According to a statement from Rubio's office, the legislation would require President Donald Trump to "impose sanctions and prohibit visas for Chinese individuals and entities who contribute to construction or development projects, and those who threaten the peace, security or stability of the South China Sea or East China Sea".

The measure would prevent American citizens from investing in Chinese companies under sanction and halt foreign aid to countries recognizing China's claims to islands in the South China Sea if those claims were contested by regional neighbors. The proposed bill would also penalize foreign banks if they were caught doing business with any of the sanctioned China companies.

Tillerson Urges China to Refrain From Retaliation Against THAAD in S Korea
The bill is in its early stages and has yet to be deliberated on by House and Senate committees. It was introduced just days before the visit of US Secretary of State Rex Tillerson to Beijing as part of an Asian tour.

Chinese Foreign Ministry Spokeswoman Hua Chunying said at a news conference Friday that the proposal was indicative of the senators' "arrogance and ignorance."
Satellite footage taken on March 6 revealed the construction of a port that analysts believe could turn out to be a Chinese military installation on the North Island of the Paracels Island group.

China and some other regional players, including Japan, Vietnam and the Philippines, have differences over the maritime borders and areas of responsibility in South China Sea and East China Sea.

Beijing says that the Philippines and Vietnam deliberately use Washington's support to escalate tensions in the region. In July 2016, the Hague's Permanent Court of Arbitration ruled that China had no rights to the territory it had seized in the South China Sea.