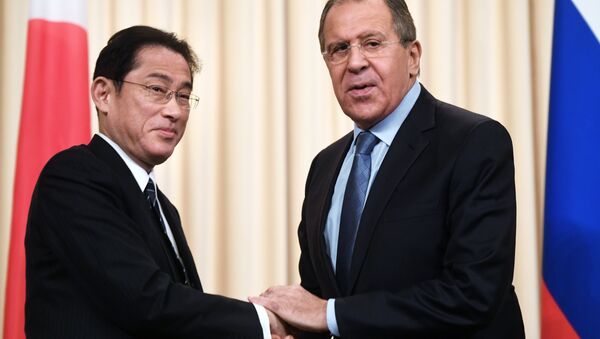 © Sputnik / Evgeny Biyatov
/
Go to the mediabank
Subscribe
International
India
Africa
Russian Foreign Minister Sergey Lavrov, his Japanese counterpart Fumio Kishida and the two countries' defense ministers are meeting in a "2+2" format in Tokyo on Monday to discuss bilateral and regional issues amid a thaw in Russian-Japanese relations.

MOSCOW (Sputnik) — Russia and Japan have taken steps to improve bilateral ties after decades of cooled relations over the Kuril Islands territorial dispute as well as a recent rift when Japan joined Western anti-Russian sanctions following Crimea's rejoining with Russia. The last bilateral 2+2 meeting took place in 2013 just before the outbreak of the Ukrainian crisis.

Asia
THAAD of Discord: Russia, Japan to Discuss US Missile Defense in Asia-Pacific
Moscow and Tokyo have been in a technical state of war since World War II having never signed a permanent peace treaty due to a disagreement over the group of islands, which Russia calls the Southern Kurils and Japan the Northern Territories, encompassing Iturup, Kunashir, Shikotan and Habomai. Russian President Vladimir Putin and Japanese Prime Minister Shinzo Abe held the second rounds of talks on resolving the issue of the Kurils in late 2016. The two leaders agreed to create a special regime on the islands leading to the establishment joint economic projects. Putin and Abe also dealt with the long-standing state of war issue.

Lavrov and Kishida agreed during 2+2 meeting on the sidelines of February's G20 ministerial meeting in Bonn after discussing the practical aspects of implementing the agreements reached by the Russian and Japanese leaders. The issue of Russian military presence in the Kurils and the far east, including Defense Ministry plans to deploy a division on the Kuril Islands in 2017, will be dealt with by Russian Defense Minister Sergei Shoigu and his Japanese counterpart Tomomi Inada.

Russia, Japan Prepare Proposals for Joint Cooperation on Kuril Islands
Japan has prepared a number of plans and issues to discuss with the Russian side, including proposals for joint naval exercises, security in the Asia-Pacific region, US missile defense system deployments in Asia as well as North Korean nuclear and missile tests, according to various officials' statements. The Japanese Defense Ministry is eyeing regular ministerial meetings as well as exchanges between the Russian army and Japan's self-defense forces.

The Russian side has also expressed the desire to discuss international issues such as terrorist and drug trafficking.