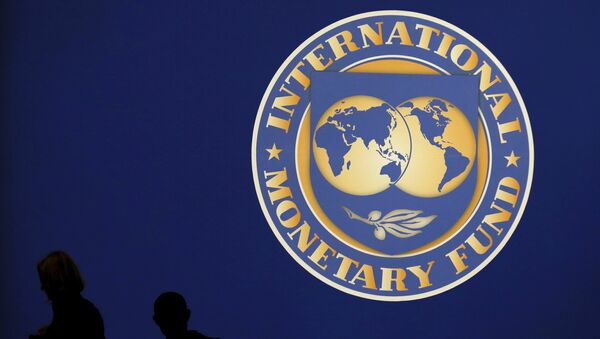 © REUTERS / Kim Kyung-Hoon
Subscribe
International
India
Africa
The executive board of the International Monetary Fund (IMF) has delayed the third review of its loan program to Ukraine, the Ukrainian Finance Ministry said Sunday.

High Expectations: Poroshenko Hopes Ukraine Will Get $1Bln From IMF in March
KIEV (Sputnik) – Earlier in March, IMF Communications Department Director Gerry Rice said the fund's directors planned to meet on March 20 to make the final decision on providing a new tranche of loans to Ukraine. Later, Ukrainian President Petro Poroshenko stated he hoped to receive $1 billion in IMF loans before the end of the month.

"The IMF Executive Board postponed for a short period looking into the third review of increased loans to Ukraine, which was planned for Monday," the ministry said in a statement.

The delay was caused by the blockade of the war-torn Donbass region by Ukrainian activists as well as the government's decision to suspend transport connections until a full ceasefire in east Ukraine, according to the ministry.

"The clarification is important for both sides in order for the program to have maximum efficiency. The corresponding consultations have been launched. We plan to conclude them shortly," Ukraine’s Finance Minister Oleksandr Danilyuk was quoted as saying by the ministry.