Only a Fool Would Trust Rogue State USA 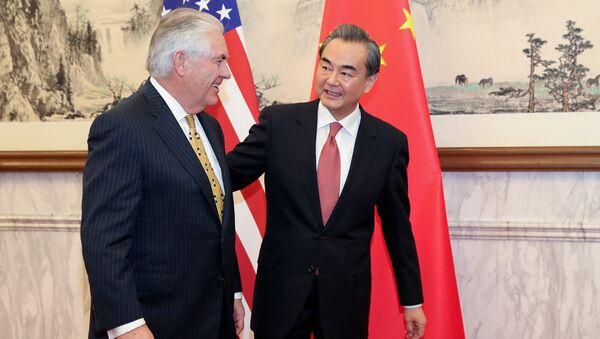 Finian Cunningham
All materials
The United States suffers from a chronic trust deficit, to put it mildly. Anything that its leaders say must be weighed against years of deception and relentless criminal conduct by US governments.

Only a fool would trust anything that comes out of Washington.

US Secretary of State Rex Tillerson visited Chinese President Xi Jinping at the weekend, vowing greater cooperation to reduce tensions boiling up on the Korean Peninsula. Only a day before, however, Tillerson was threatening that the US would use pre-emptive military strikes against China's ally North Korea if "we believe" it presented a threat "to us".

So what's it to be then? Cooperation or pre-emptive war?

Bad Boys! Trump Says North Korea 'Behaving Very Badly', China 'Does Little'
At the same time that Tillerson was seemingly conveying a cordial tone to Beijing, President Trump was mouthing off at home that "North Korea was behaving badly" and that China had not done enough to contain it.

Trump's comments angered China, with the latter responding it had in fact gone to great lengths over recent years to calm tensions on the Korean Peninsula between North Korea and the American ally in the South, by continually calling for dialogue, which the US has continually rebuffed, preferring to play hardball instead.

The weekend exchange is but one brief insight into why Washington cannot be trusted. The president and his top diplomat can't even articulate a consistent policy for even a few hours. How could one possibly take them seriously?

But Trump and Tillerson's mixed signals are a mere trifling matter. Why the US cannot be trusted has got much more to with decades of systematic misbehavior by Washington. North Korea "behaving badly," says Trump. Typical American arrogance and ignorance do not admit the reality of the US behaving atrociously.

'Too Much Dissent': Why the US Should Cross Its Fingers for Tillerson in China
The whole specter of a nuclear war on the Korean Peninsula was created in the first place by the United States. Its decision to drop atomic bombs on Hiroshima and Nagasaki in August 1945 was motivated by the Soviet Union's imminent entry into the Pacific War. Washington did not want to see the Soviet Union taking Japanese or Korean territory.

Korean communist rebels were about to over-run the peninsula in 1945 and reclaim it from imperialist Japanese control. By dropping the atomic bombs on Japan, the Americans thwarted the advance of communists in Asia-Pacific. Korea was de facto divided between a communist northern state and a US-installed southern state, which also saw the reinstatement of quislings who had collaborated with Japanese fascism.

The subsequent Korean War (1950-53) was a US-led orchestration to defeat the communist North. Over three million Koreans were killed in a war which brought the peninsula to the brink of nuclear conflagration, if American generals had their way at the time. Still, more conventional bombs and napalm were dropped on North Korea by the US than on the whole of Japan during the Pacific War, according to international war crimes lawyer Christopher Black.

THAAD Drama: China May Jam US Radar Signals in South Korea
Pyongyang, the northern capital, was obliterated by US carpet bombings. American troops committed countless massacres against civilians, such as in Sinchon when hundreds of women and children were incinerated in ditches and air raid shelters.

Koreans were forced to live in caves to escape the brutal American bombing of their country. One special terror technique was the flying of nuclear-capable bombers over the northern territory. The people below did not know if a fate like that of Hiroshima was about to descend on them.

When the bombs stopped in 1953, the US never declared a full armistice or signed a non-aggression treaty, as is normal following conflicts. From the North Korean standpoint, the Americans still retain the "right" to attack their country.

US Senators Propose Bill Penalizing Aggression by China in South China Sea
When the US today conducts annual war maneuvers with its South Korean ally, we can perhaps understand why North Korea is alarmed by what it sees as a rehearsal for resumed hostilities.

Over the weekend, US Secretary of State Tillerson said that his nation does not want conflict with North Korea. But Washington ruled out the reasonable proposal from China for the US to cancel its war maneuvers in exchange for North Korea curbing its weapons program.

The US is moving ahead with installation of the Terminal High Altitude Area Defense (THAAD) system in South Korea. That move defies warnings from both China and Russia that it is destabilizing the entire region and provoking a new arms race.

Washington's words of "not wanting war" are accompanied by the ultimatum that North Korea unilaterally disarm its nuclear weapons program and testing of ballistic missiles.

But history has shown that any country which is not sufficiently defended is liable to be destroyed by Washington. We saw this with regard to former Yugoslavia, Afghanistan, Iraq, Libya, Syria and Somalia. Anywhere where the Americans can make easy prey, they will do so with the utmost barbarity, and then add insult to injury by calling it "nation building".

Despite Western media demonization of North Korea as some kind of crazy rogue state, the people there are not fools. They know from family histories the atrocious cost of American war. And they know that any nation perceived as weak by Washington will be bombed back to the Stone Age.

Situation on Korean Peninsula Reaches 'Explosive Stage' - Pyongyang
Nevertheless, there is ample opportunity for a positive way forward. The Korean people, North and South, have always been willing to engage in dialogue for the peaceful reunification of their country, which was only artificially partitioned by American hegemonic meddling.

This spirit of dialogue and cooperation is also shared by the majority of citizens in the wider region. Chinese and Japanese people quite reasonably want a general demilitarization of the region. That primarily means Washington removing up to 100,000 of its troops from Japan and South Korea, along with its bases and all the other trappings of war.

The biggest hindrance to democratic, peaceful self-determination in Korea and the region is Washington's insistence on remaining there to "protect" its allies. Washington forced its way into the region by using nuclear terrorism, and it remains there through the same ploy of nuclear menace — under the guise of blaming North Korea.

Ironically, the US State Department described Tillerson's tour of the Asia-Pacific this weekend as a "listening tour".

Well if Tillerson and his government were truly listening, they would hear the following: stop destabilizing whole countries and inciting wars; leave ordinary citizens in neighboring nations to get on with their lives and mutual relations; and American militarism should pack up and go home to redirect its monstrous resources to improve the lives of millions of impoverished American families.

There is a direct analogy here with how Washington and its NATO agenda of hostility towards Russia are destabilizing Europe against the wishes and interests of most European citizens.

No wonder so few trust American power. It is the most destructive force in the world since the Second World War. American criminal wars and subterfuges have destroyed dozens of countries.

So when an American envoy talks about wanting peace, while at the same time threatening pre-emptive attacks and demanding that others unilaterally disarm — the only appropriate response is contempt.

Only a fool would trust Washington because it is the biggest warmongering rogue state on Earth.