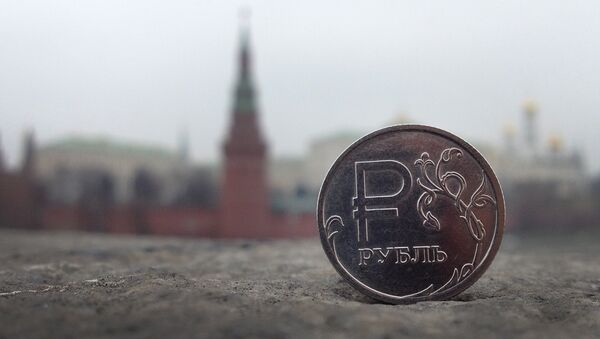 © AFP 2021 / ALEXANDER NEMENOV
Subscribe
The Russian economy is completing a steady recovery from recession and its government bonds are attracting investors reluctant to invest in an increasingly unstable Eurozone.

Anniversary of Crimea's Reunification With Russia
Russian government debt is becoming a safe haven for investors amid economic and political uncertainty in Europe.

The increasing popularity of the bonds has seen yields fall in recent months. According to data from Trading Economics, the yield on ten-year Russian government bonds dipped below eight percent on Thursday, their lowest yield since February 2014.

In May of last year, the Russian Finance Ministry placed $1.75 billion of 10-year Eurobonds at an annual yield of 4.75 percent. Investors snapped up the bonds despite doubts about whether major clearing centers would admit the bonds for settlement due to confusion over sanctions.

Euroclear Bank eventually started to accept the Eurobonds in August and since then their yield has declined to 4.26 percent, according to CBonds.

Russia's relatively low sovereign debt to GDP ratio, at around 15 percent, and large gold and foreign currency reserves, have enabled Moscow to retain the interest of investors despite attempts to isolate Russia from the financial markets with sanctions.

Russian debt is seen as a relatively safe haven for investors in comparison with that of other Eurozone members like Portugal and Greece. According to German newspaper Die Welt, analysts believe there is a 19 percent likelihood of Portugal defaulting on its debt and a 50 percent chance that Greece will do so.

On Friday, Standard and Poor's upgraded Russia's credit outlook rating to "positive" from "stable" and reaffirmed its foreign currency credit rating at an investment-grade BB+/B.

"We expect GDP growth in Russia will pick up, averaging about 1.7% in 2017-2020, and we see a lower risk of large capital outflows, therefore moderating external pressures," Standard and Poor's stated.

On Thursday, Russian President Vladimir Putin noted that inflation in Russia has reached a steady downward trajectory as the government kept its focus on long-term development plans during instability.

"We reached the trajectory of a steady decline in inflation, which I consider extremely important. As of March 13, it was 4.4 percent year-on-year," Putin said at a Russian Union of Industrialists and Entrepreneurs session.

He noted that growth rates are returning to positive values and industrial production, including manufacturing, is increasing.

By contrast, stories about political instability and a possible banking crisis in Italy are worrying investors. Italian banks are struggling under the weight of 356 billion euros of non-performing loans – a third of the Eurozone's total – and the Italian government is under pressure from the European Central Bank to enforce a clean-up of their balance sheets.

European Banks Risk Facing a 'Collapse Worse Than the 2008 Financial Crisis'
In December the Italian government announced the creation of a 20 billion euro ($21 billion) fund to help distressed banks. However, a third of that sum is earmarked to rescue just one lender, Monte dei Paschi di Siena.

Atlante bank rescue fund was set up in April to help Italy's struggling banking sector, the fourth largest in the Eurozone, by buying bad loans. In addition to funding from state-owned entities, it raised 4.25 billion euros from banks and insurers.

However, last month UniCredit bank wrote down the value of its 700 million euro ($756 million) investment in Atlante, indicating it doesn't believe it will make profit on the investment. The move led to speculation that other banks will follow suit.