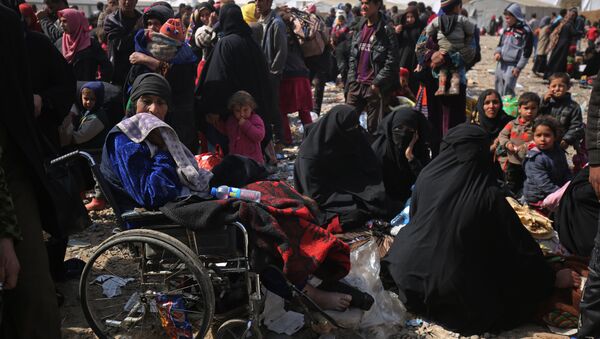 The western mainstream media, so vocal during the retaking of Aleppo and the hardships of the Syrian civilians, is stubbornly ignoring the humanitarian catastrophe in Mosul, Iraq. Meanwhile, one of the refugees able to flee the city told Sputnik about the dire situation in the city and surroundings.

Russia Indignant at Western Media, Int'l NGOs Keeping Silent About Mosul Crisis
A resident of western Mosul who was lucky to flee the city has appealed to humanitarian organizations to provide basic aid to refugees.
In an interview with Sputnik Arabic the woman said that the Hamam al Alil refugee camp, located to the south of Mosul, is on the brink of a humanitarian catastrophe.

The people there need basic supplies: bread and water, otherwise they are going to die, she said.

"I am appealing to humanitarian organizations to send us humanitarian aid, especially bread and water. We are also in dire need of other products such as gas and heating oil, electric generators, tents," she told Sputnik.

The woman said that up to three families share a single tent and many people live in the streets. No humanitarian aid has been ever delivered to their camp. They don't even have tanks or otherwise capacities for water.

"We have no sanitation, the garbage needs to be removed. The water is very dirty, we can't drink it, it is dangerous as it causes 'gippy tummy'," she said.

The refugee also asked for milk and diapers for kids.

She further said that she is a teacher by profession, however her family, along with many others, don't have any money as she has not received a salary for over two years now. Her family has also run out of things to sell. Now there is no work in the camp. How will these people survive? she asked.

Russia 'Fully Shares Deep Concern' Over Alleged Use of Chemical Weapons in Mosul
Earlier on Thursday, the Russian Foreign Ministry said that it is outraged by Western media and international NGOs silence over the events in Mosul.

On March 3, media reported that chemical weapons had been used during a fight between the Daesh terror group and Iraqi troops in East Mosul. According to the International Committee of the Red Cross (ICRC) and the World Health Organization (WHO), 12 patients were referred to hospital showing symptoms consistent with exposure to a toxic chemical agent. The number has since risen to 15.

As Battle Nears End, Humanitarian Crisis in Mosul Only Grows
"The Russian Federation fully shares the deep concern of the OPCW and the UN over the use of chemical weapons in Iraq's Mosul," Zakharova said when commenting on the issue.

The city of Mosul has been occupied by Daesh since 2014. The operation to retake it began on October 17, 2016 and resulted in the liberation of Mosul’s eastern part this January, but fighting continues in the city's western areas. The operation to liberate it started on February 19.