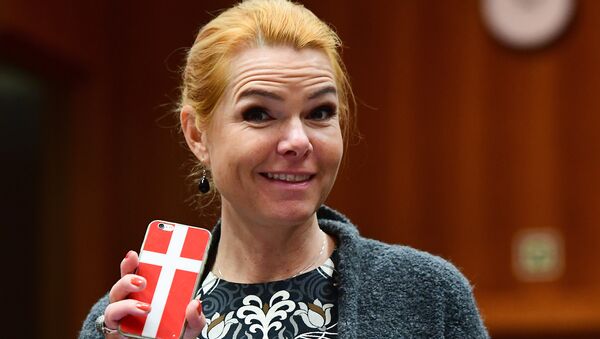 Danish Integration Minister Inger Støjberg, who is renowned for her hard stance on migration, has triggered a media storm on Facebook: to celebrate her 50th consecutive immigration restriction, Støjberg posed for a self-portrait with a birthday cake she'd had made to commemorate the occasion.

Denmark Revives Blasphemy Law to Charge Man Who Burned Quran
Since taking over as Danish Integration Minister in 2015, Inger Støjberg has pushed through 50 laws restricting immigration to the Nordic country. To mark this notable occasion, Støjberg posted a portrait of herself holding a birthday cake earlier this week, Danish TV-channel TV2 reported.

"Today the 50th restriction was passed on immigration. This calls for a celebration!" Støjberg wrote, linking to a list of restrictions by her ministry.

However, Støjberg's little party quickly caught the eye and in some cases prompted the ire of her fellow Danes, making the number of expansions to her "cake post" quickly, making this one of the most reacted-to posts in the Nordic country. Predictably, the left reacted to Støjberg's post with bitter criticism, accusing her of being an insensitive cynic.

Philosopher Arno Victor Nielsen suggested that Støjberg had no decency, while Danish-Syrian doctor and commentator Haifaa Awad promised to share Støjberg's post with Syrian doctors still fighting for people's lives in the war-torn country and others unable to flee, "far away from this cake buffet." Furthermore, Danish journalist and writer David Trads reacted by juxtaposing the portrait of a glad Støjberg with the iconic picture of Omran Daqneesh, a 5-year-old Syrian boy who became lethargic after a bomb raid. He accused Støjberg of having "no shame in her" and insisted that his montage illustrated the nature of the worst humanitarian crisis in recent years.

However, many had no ethical qualms about the celebration and voiced their support for Støjberg, who in recent years has emerged as a staunch antagonist of liberal immigration policies.

"Inger, you are the most determined Danish politician I know and the only one I have seen who actually keeps promises," user Thomas Oxbøll wrote.

Outside her home country, Støjberg is best-known for her attempts to scare off asylum seekers considering Denmark by, among other things, publishing anti-refugee ads in Lebanese newspapers and launching the infamous "jewelry law," which allowed the Danish state to collect the newcomers' valuables to offset accommodation costs.

Støjberg herself defended her decision by suggesting it was "not at all unnatural to celebrate political victories." She also assured the Danish newspaper Jyllands-Posten that she had ordered and paid for the cake herself.

Despite Støjberg's unrelenting efforts, however, the proportion of babies born with non-Danish mothers has risen significantly over the past decade, Christian newspaper Kristeligt Dagblad reported. In 2016, 20 percent of all children born in Denmark were of immigrant background.