Anniversary of Crimea's Reunification With Russia 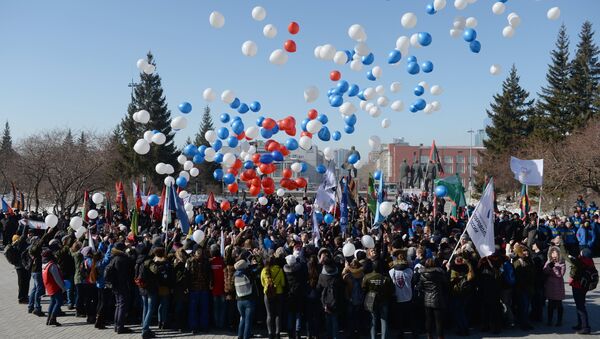 © Sputnik / Alexander Kryazhev
/
Go to the mediabank
Subscribe
International
India
Africa
Saturday marks three years since Russian President Vladimir Putin and the Crimean leadership signed an agreement on the accession of the Republic of Crimea to Russia, after 96 percent of the Crimean peninsula’s population expressed support for the move in a public referendum.

Russia
Crimea's Reunification With Russia Prevented Bloodshed - Official
MOSCOW (Sputnik) – On February 22, 2014, there was a power shift in Ukraine that had the attributes of a coup d'etat. The Ukrainian parliament, the Verkhovna Rada, ousted then President Viktor Yanukovych from power, changed the constitution, and set new presidential elections for May 25.

On February 23, 2014, over 20,000 people gathered on Nakhimov Square in downtown Sevastopol for the "people's will" rally. The participants expressed their mistrust of the local authorities and Ukraine's Verkhovna Rada. The city's residents unanimously voted for businessman Aleksei Chaly to become the city's new mayor.