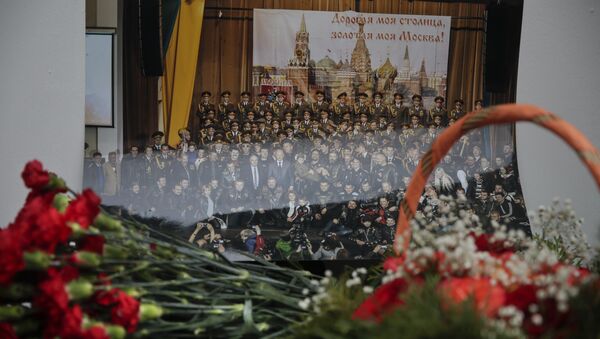 © AP Photo / Pavel Golovkin
Subscribe
International
India
Africa
One more concert will take place on March 24. All the raised funds from the two events will be sent to the families of the Alexandrov Ensemble killed in a plane crash in December.

"Some 320 guests came to the concert today," Orlovskaya told reporters on Friday after the performance at the Russian Embassy. "Moreover, we had some 150 people on the waiting list, whom we were unable to accommodate."

The singer noted, however, that one more charity concert will take place on March 24 at the Russian Cultural Center.

Orlovskaya, who lost her friends and colleagues in the December tragedy, explained that all the raised funds from the two events will be sent to the families of the plane crash victims.

Russian Ambassador to the United States Sergei Kislyak said that he felt very warm-hearted about the Russian compatriots took the initiative to honor the memory of the ensemble's members.

"I would also like to note that the audience, who were mostly Americans, reacted very warmly and wonderfully," Kislyak added.

Turkish Janissary Band Pays Tribute to Departed Russian Military Musicians
The audience also watched a slideshow of photos of those whose lives were taken by the plane crash while listening to the music.