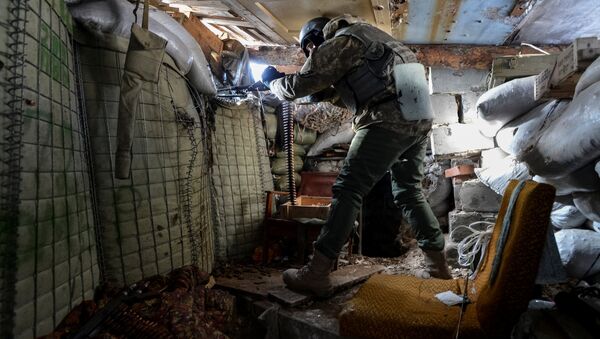 © REUTERS / Oleksandr Klymenko
Subscribe
International
India
Africa
The United States ideally aims to find a peaceful solution to the conflict in the Ukraine, US President Donald Trump said during a joint press conference with German Chancellor Angela Merkel on Friday.

WASHINGTON (Sputnik) — Trump and Merkel held a first meeting in the White House earlier in the day, discussing trade and security. It was Merkel’s first visit to the US in two years.

"I also appreciate Chancellor Merkel’s leadership along with the French President to resolve the conflict in Ukraine, where we ideally seek a peaceful solution," Trump stated.

In October 2016, Merkel met with the leaders of Russia, Ukraine and France to talk about implementing the stalled Minsk agreement to reinstate peace in eastern Ukraine.

No Love Lost?! Trump Refuses Merkel Handshake in Oval Office Meeting (VIDEO)
Trump also praised Merkel for her efforts to resolve the ongoing conflict in Ukraine's as well as her leadership in providing support for NATO and the alliance’s operations in Afghanistan. Speaking of NATO, he also added that he reaffirmed his commitment to the bloc in a meeting, and underscored the need for out all allies to pay "their fair share for the cost of defense."

In 2015, the sides to the conflict reached another ceasefire agreement in Minsk following negotiations brokered by the leaders of Russia, Ukraine, France and Germany.

However, the agreements have repeatedly been violated, with the conflict escalating near the southeastern Ukrainian towns of Avdiivka and neighboring Yasynuvata in late January.