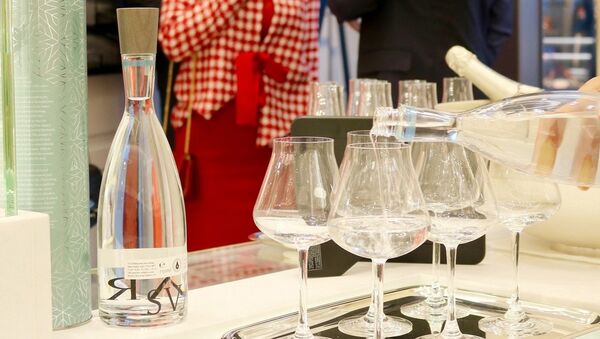 © Photo : Svalbardi.com
Subscribe
The Arctic is commonly associated with extreme cold, but also crystal clear purity. This secondary association is being marketed by a Norwegian company that is hoping to make a fortune selling premium-class iceberg water. Incidentally, the company is particularly targeting the Muslim market.

Finnish Company Making Money Out of Fresh Nordic Air
However ridiculous it may sound, ordinary water may become a luxury commodity. Of course, it helps if your water comes from a unique source or is said to possess exceptional qualities. The Norwegian-based start-up Svalbardi is trying to win the hearts of extravagant connoisseurs with iceberg water from near the North Pole, which it hopes to sell for $100 a bottle.

The idea to create a luxury product arose when Norwegian-American entrepreneur and former Wall Street analyst Jamal Quereshi was vacationing in Norway's Arctic archipelago of Svalbard. Today, he is busy harvesting iceberg water in the vicinity of Svalbard's capital Longyearbyen. The product sells online and has already been picked up by the London-based luxury department store Harrods.

Co-investor Terje Aunevik told the Norwegian daily Dagbladet that the stiff pricing reflects the importance of storytelling and exclusivity, since Svalbardi, which is produced and bottled at the 79th parallel north, is clearly "not just another bottle of water."

Water from the North Pole. #Svalbardi only $100 a bottle pic.twitter.com/M2LwYG2h4U

​"There are no bells and whistles in a bottle of water coming from glaciers in Longyearbyen. We are frank about the concept and do not cheat," Terje Aunevik maintained.

Green Thumbs Up! Norway to Pioneer Electric Jets in Arctic
According to Aunevik, the premium water market is currently one of the fastest growing beverage segments in the world.

"We're talking luxury segment here. There are about 1.5 billion Muslims in the world who basically do not drink alcohol. It's actually a huge market for non-alcoholic beverage concepts that can be used for great occasions," Terje Aunevik told Dagbladet.

Professor Fred Selnes, a marketing expert at the BI Norwegian Business School, maintained that the luxury category has its own logic.

​"These are symbols sold for customers to display, which imply 'Look what I can afford' or 'Look how clever I am.' Once you have a lot of money, the cost does not really matter," Fred Selnes told Dagbladet.

Relevance has the honour of tasting the most pristine #water in the world, harvested from icebergs in Arctic waters, courtesy of #Svalbardi pic.twitter.com/PBdUAglVLC

​However, despite its sparkling prospects, Svalbardi has already come under fire from environmental activists. Only one in five of Svalbardi bottles gets recycled, the Water Project NGO maintained. The criticism also involves ethical issues, as many believe it to be disrespectful and profane to make money on water from one of the world's most pristine areas, while millions of people live without access to clean water. On the other hand, Svalbardi has been certified as a zero-emission business by CarbonNeutral and reportedly supports a number of environmental projects involving, among others, efforts to promote the availability of clean water in Uganda.

Finns Win Health Aficionados' Hearts With Wholesome Shroom-Laced Coffee
"Quantity-wise, our production is such a small-scale one that it barely affects nature at all. Also, we only use ice cubes that are separating from the glacier and are about to melt anyway," Jamal Quereshi told Norwegian national broadcaster NRK.

If you thought that Svalbardi was the world's most expensive water, then consider Fillico Jewelry Water, which costs almost twice as much.

000000
Popular comments
Also known by it's German name -schwein wasser. A famous bi-product that never has been anywhere near the Arctic. :)