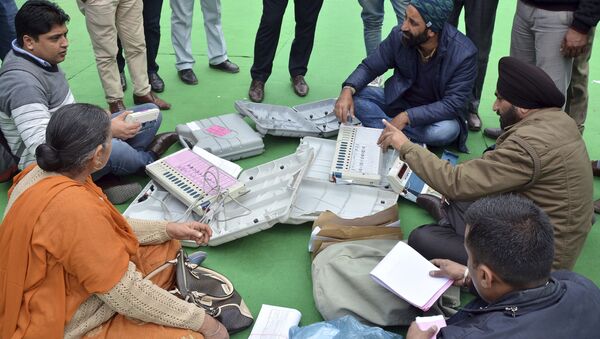 © AP Photo / Prabhjot Gill
Subscribe
Parties that fared badly against Prime Minister Narendra Modi's BJP in state polls have alleged that voting machines have been rigged and tampered with.

Amid the growing chorus among opposition leaders to reintroduce paper ballots, the Election Commission of India (ECI) reiterated its faith in the use of EVMs in an official statement on Thursday.

"The ECI unequivocally reiterates that given effective technical and administrative safeguards, EVMs are not tamperable and integrity of the electoral process is preserved… It may be stated that such allegations and suspicions have not been raised for the first time. Even on earlier occasions, the Commission has offered opportunities more than once to those alleging the tamperability of EVM, no one has been able to demonstrate to the Commission that the EVM with ECI and used in the country's election process, can be manipulated or tampered with,” said the ECI statement.

Modi’s BJP won over 300 seats in the 403-member Uttar Pradesh assembly elections, reducing other parties to less than 50 seats. Exit polls or pre-poll surveys couldn't predict the scale of victory, prompting the allegations from defeated parties.

Mayawati, a former Uttar Pradesh chief minister and leader of the Bahujan Samaj Party, was the first to target EVMs. She has been joined by Delhi state chief minister Arvind Kejriwal whose Aam Aadmi Party contested state polls in Punjab. The Congress party too is demanding greater transparency.

The blame-game has come despite independent international observers, including Russian Election Commission member Nikolai Levichev, giving a thumbs-up to the process.

"We have seen by our own eyes the mass scale of electoral operation, the enormous number of people involved in each stage of preparation in the conduct of polling which is supplemented by a large number of observers appointed by the different political parties and candidates. That provides conformity of the transparency of the election procedure and mass involvement of people in the accomplishment of the procedure. As well the attendance by the voters at the polling stations was very hectic which marks the keen interests of the voters to come and vote,” Levichev, who had visited Uttarakhand state during the elections, had told Sputnik earlier.

"These machines are fully tamper-proof as a combination of safeguards is used. But controversies about EVMs keep cropping up. Every political party has questioned the EVMs at one point or another. When they win with the same machines, they just keep quiet instead of publicly apologizing and eating their words," SY Quraishi, India's former Chief Election Commissioner, told Sputnik.

Quraishi agrees that "the Supreme Court's suggestion of putting paper trails in place, a demand raised in the ongoing controversy, must be implemented by the Narendra Modi government" to enhance faith and greater transparency in the EVMs.

000000
Popular comments
The failure of Demonetisation has harmed several hundred million of honest Indians. Many died, income and saving being forfeited or destroyed over night. It demonstrated Modi's incompetence and cruelty. Million and millions of good Indians voted against hie party. It is impossible and no good reason for him to have won.
Sir Percy
19 March 2017, 19:18 GMT
000000
To prove it was a fair election, an investigation by sampling should be conducted by an independent commission supervised by UN to randomly selecting districts for auditing and match individuals intended votes against actual records.
Sir Percy
19 March 2017, 19:26 GMT
000000
Newsfeed
0
New firstOld first
loader
LIVE
Заголовок открываемого материала
Access to the chat has been blocked for violating the rules . You will be able to participate again through:∞. If you do not agree with the blocking, please use the feedback form
The discussion is closed. You can participate in the discussion within 24 hours after the publication of the article.
To participate in the discussion
log in or register
loader
Chats
Заголовок открываемого материала
Worldwide
InternationalEnglishEnglishMundoEspañolSpanish
Europe
DeutschlandDeutschGermanFranceFrançaisFrenchΕλλάδαΕλληνικάGreekItaliaItalianoItalianČeská republikaČeštinaCzechPolskaPolskiPolishСрбиjаСрпскиSerbianLatvijaLatviešuLatvianLietuvaLietuviųLithuanianMoldovaMoldoveneascăMoldavianБеларусьБеларускiBelarusian
Transcaucasia
ԱրմենիաՀայերենArmenianАҧсныАҧсышәалаAbkhazХуссар ИрыстонИронауОssetianსაქართველოქართულიGeorgianAzərbaycanАzərbaycancaAzerbaijani
Middle East
Sputnik عربيArabicArabicTürkiyeTürkçeTurkishSputnik ایرانPersianPersianSputnik افغانستانDariDari
Central Asia
ҚазақстанҚазақ тіліKazakhКыргызстанКыргызчаKyrgyzOʻzbekistonЎзбекчаUzbekТоҷикистонТоҷикӣTajik
East & Southeast Asia
Việt NamTiếng ViệtVietnamese日本日本語Japanese俄罗斯卫星通讯社中文（简体）Chinese (simplified)俄罗斯卫星通讯社中文（繁体）Chinese (traditional)
South America
BrasilPortuguêsPortuguese
NewsfeedBreaking
15:44 GMTUS Health Official Wants to 'Blow-Dart' COVID Vax Into Black People in New Project Veritas Video
15:25 GMTTaliban Plans to Form Commission in 2022 to Draft New Constitution
15:22 GMTWatch Fuego Volcano Erupt in Guatemala, Spewing Out Vast Amounts of Smoke and Lava
15:17 GMTRussian Officials Assess Proposal to Populate Siberia With 'Resurrected' Woolly Mammoths
15:13 GMTParis to Bill Canberra for Cancellation of Submarine Deal After AUKUS Pact
14:51 GMT'Britney VS Spears': Pop Star's Fiancé Accuses Docu Makers of Earning Profit From Her Story
14:41 GMTRussian Union of Journalists Chief Slams 'Unacceptable' US Sanctions Against Colleagues
14:31 GMTUS Investment Firm Purchases Italy's Oldest Football Team
14:29 GMTUS to Find Ways to Get More Help to Haitian Migrants After US Envoy Resigned, State Dept. Says
14:25 GMTAnthony Joshua Says He Would ‘Fight King Kong' if He Had to as He Defends Titles Against Usyk
14:18 GMTFormer Nazi Helmut Oberlander Dies in Canada Before He Could Be Deported, Reports Say
14:07 GMTWhat's Behind Africa's Increasing Drive to Launch Satellites?
14:06 GMTExpo 2020 in Dubai Set to Boost Economic Development in Arab World, Organiser Says
13:58 GMTTwo Afghan Evacuees Charged With Sexual, Physical Assault in US, Justice Department Says
13:51 GMTBritish Government Preparing for 'Worst-Case Scenario' of Gas Prices, Says MP
13:43 GMTOutrage as Missouri High School Students Reportedly Come Up With Petition to Reinstate Slavery
13:42 GMTEC Does Not Expect Increase in Smartphone Prices Over Universal Charging Port Regulation
13:26 GMTAmericans Favour Trump Over Biden After Afghanistan Pullout Disaster, Poll Says
13:25 GMTComputer Game to Measure Children's Mental Development Launched by MSUPE
13:21 GMTDay 3 of 76th Session of UN General Assembly