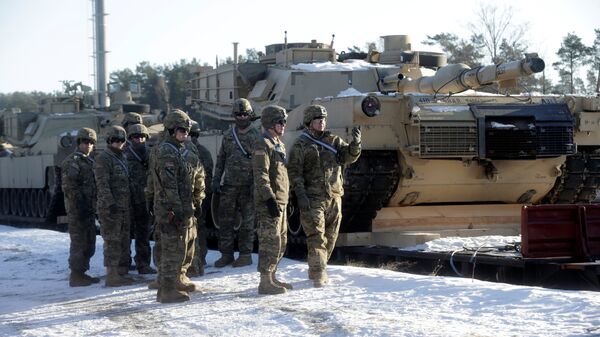 © REUTERS / Ints Kalnins
Subscribe
International
India
Africa
As NATO is continuing to drag its manpower to Russia's western borders, President of Germany's Federal Intelligence Service Bruno Kahl claimed that it is Moscow who is responsible for militarization of Europe.

MOSCOW (Sputnik) — Russian military threat has grown, it cannot be regarded just as defense against the West, Kahl said Friday.

"The Russian threat has grown. Therefore, we take it very seriously. This is not only a propaganda threat, it is the return of the entire topic of conventional weapons to the agenda," Kahl told Spiegel magazine.

He added that Russia has seriously increased its presence on the western border.

"Russia doubled its military power on the western border. This is not just Iskanders. There are many flying vehicles in the Crimean region, conventional armed forces. All this can not be regarded as a defense from the West. This should be seen as a potential threat," Kahl said.

Thanks But No Thanks: Swedes Stand Up to Army Bosses Lobbying for NATO Accession
At the same time, on Friday, 130 UK soldiers landed at the Amari Air Base in Estonia. More British troops, as well as servicemen from France and Denmark, will arrive in Estonia in the coming weeks, with the last troops of the NATO battalion to be stationed in Estonia set to arrive in the country in the first half of April. A total of 800 British soldiers are expected to provide security not merely to the Baltic states, but also Berlin, London and Paris, according to UK Ambassador to Estonia Theresa Bubbear.

Overall, NATO is planning to deploy four multinational battalions in the Baltic states and Poland by June 2017.

Romania, a former Warsaw pact state, is looking to significantly bolster its military arsenal, aiming to purchase 20 F16 aircraft, 8-wheeled armored personnel carriers and other equipment, in a bid to drag its defense spending to the NATO-mandated two percent of GDP.

NATO Buildup Near Russian Borders: French La Fayette Frigate Enters Black Sea
Moreover, the US military is routinely shipping weapons to Europe and working on the concepts to prepare the United States military to tackle "highly capable peer enemies" and "to deny Russia a rapid victory" in a course of potential conflict.

NATO has been steadily building its military presence in Central and Eastern Europe ever since 2014, using alleged Russian aggression as a pretext. Russia has repeatedly voiced its protest against the increased number of NATO troops near its borders.

"The alliance is known to have deployed hundreds of military bases along the rather big perimeter around Russia. The real increase in the number of NATO troops in countries neighboring Russia through permanent rotation of contingents as well as the lack of the constructive dialogue with us urge Russia to take serious retaliatory steps," Russia's Ambassador to Lithuania Alexander Udaltsov said in February.