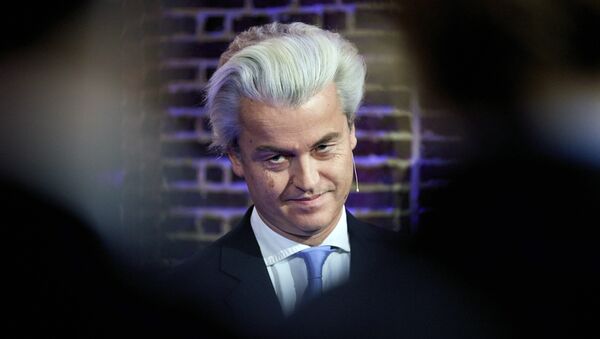 © AFP 2022 / Martijn Beekman
Subscribe
Geert Wilders’ far-right PVV party failed to get the plurality of seats in the Dutch Parliament yesterday, with Prime Minister Mark Rutte’s VVD party taking the lead. But does this really amount to a fatal blow for the far-right movement in Europe? Brian Becker invited Walter Smoralek and Eugene Puryear to discuss the issue.

Dutch Far-Right PVV Party's Leader Geert Wilders Says Ready to Enter Coalition
Despite the fact that votes are still being counted, it is now evident that Wilders' far-right PVV party will not secure a plurality in the Dutch government. French President François Hollande has already declared the general election result a "victory against extremism." But is it really so simple? According to a report from the Evening Standard, French presidential candidate Emmanuel Macron said the result shows the "breakthrough of the extreme right is not inevitable."

​According to Smoralek, producer of Loud and Clear on Radio Sputnik, mainstream Dutch politicians, faced with the surprising popularity of Wilders' far-right sentiments, had to adopt a significant degree of rightist rhetoric. And this is a process that is happening all across Europe.

Talking to Loud and Clear host Brian Becker, Smoralek observed that Nicolas Sarkozy, who ran for the Republican nomination in France, adopted a certain degree of far-right positioning, borrowed from National Front leader Marine le Pen. He also pointed out that even Angela Merkel's CDU party in Germany has demonstrated a visible drift toward the far-right Alternative for Germany.

"This is something we see across Europe and, for some extent, in the United States," Smoralek noted. "When the far-right has the initiative, when they control the direction of politics… the mainstream parties [seek to] remain in the driver's seat by adopting the views of the semi-fascists."

Despite Wilders' election loss, far-right ideas are not likely to be dropped by mainstream parties right after the election.

"It might be a momentary sigh of relief that Wilders didn't win in the first place, but certainly the general trend remains the same," Smoralek noted.

"The oppression that [Dutch] non-Europeans face comes from two angles: one from the state itself which may take the form of anti-working-class economic policies that devastate social programmes that working-class immigrant community rely on; it can also be repression by the police."

"Even the Socialist party called for more police," Puryear agreed. "Even some of the leftist parties… agree on heavier and heavier state police presence and tighter control for immigrants."