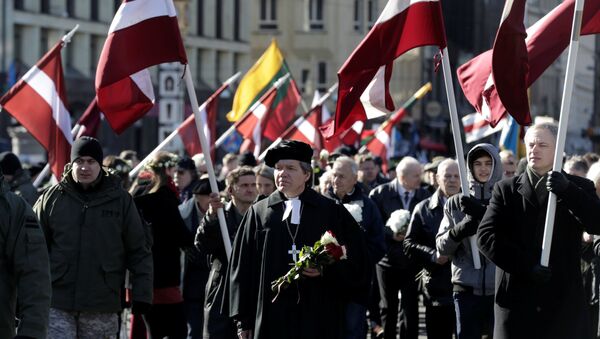 Several thousand people, including several Latvian lawmakers and nationalists from neighboring Lithuania and Estonia, gathered in central Riga Thursday to mark 'Remembrance Day of the Latvian Legionnaire' –a commemorative event dedicated to the Waffen-SS formations formed by the Nazis in occupied Latvia in 1943. On March 16, 1944, the Latvian Legion engaged in its first battle with the Red Army, with commemorations to that event held since the 1990s after Latvia regained its independence from the Soviet Union.

Annual Nazi Veterans March Kicks Off in Riga (VIDEO)
The column proceeded from the Riga Cathedral to the Freedom Monument, laying flowers to the memorial as anti-fascist protesters cried 'Shame of Latvia'.

According to police, about 2,000 people took part in the march, which is up from about 600 last year. Police told Sputnik Latvia that five protesters, including two Latvian Anti-Fascist Committee members, were detained. Two young men shouting offensive comments at the legionnaires were also detained. Administrative charges have been filed against two protestors. Police also forced two members of the German anti-fascist movement to take down their posters.

The Latvian Anti-Nazi Committee refused to hold their own meeting at the allotted place and time, after the Riga City Council only allotted them space for their protest under a bridge near a canal, which they found to be humiliating. Instead, activists have called on city residents to come to Freedom Monument at 5:30 pm local time to light candles in memory of the victims of the Nazi occupation. 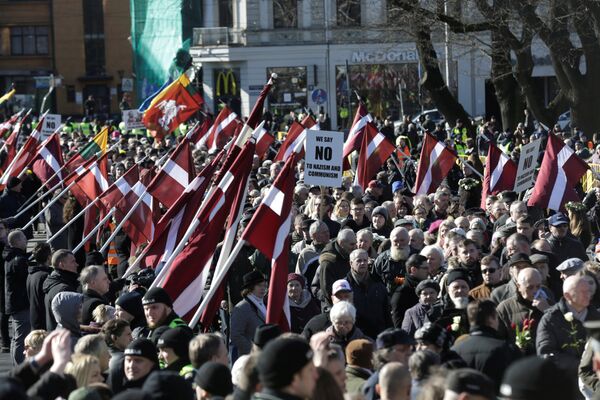 People hold flags and placards, as they participate in the annual procession commemorating the Latvian Waffen-SS (Schutzstaffel) unit, also known as the Legionnaires, in Riga, Latvia March 16, 2017
© REUTERS / Ints Kalnins

SS veterans and their supporters have been gathering yearly in Riga since 1994. The nationalist group Daugavas Vanagi ('Hawks of the Daugava'), formed in 1945 by ex-legionnaires, is the main organizer of the event. About 150,000 mostly ethnic Latvians served in Latvia's two Waffen SS grenadier divisions.

Scientists Learn Shocking Truth After 'Concentration Camp Experiment' in Poland
The military units have been widely condemned for participating in mass executions, as well as punitive actions against partisans and civilians on Latvian territory, as well as Poland, Belarus, Ukraine and Russia. After the war, all units of the Waffen SS, including the Latvian legion, were declared to be criminal organizations at Nuremberg.

Moscow has long considered the SS Legionnaires' march a disgrace, and has criticized the event alongside anti-fascist organizations worldwide. Human rights ombudsman Konstantin Dolgov has characterized the march as an outrage against the memory of the Nazis' war crimes.

Nazi veterans from Waffen SS Legion "Latvija" and its glorifiers are freely gathering again to march in Riga on 16.03.2017. Horrific! pic.twitter.com/DS813lGZKt

In addition to the outrage it has caused among anti-fascist Latvians and Russians, the march is also seen as particularly offensive to Jews. The Latvian Jewish community was all but wiped out by the Nazis, with an estimated 72,000 Latvian Jews exterminated during the war – that's 80% of the country's pre-war Jewish community. 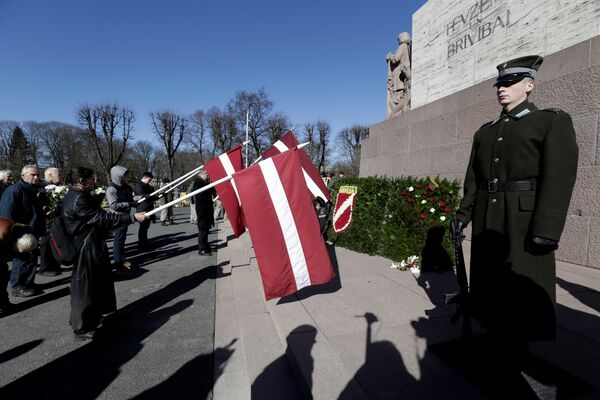 "The inaction of Latvian authorities in this case is both bewildering and alarming," Kantor said, in press statement put out by the EJC. "Peace in Europe and the education of future generations are not possible to ensure without openly condemning the glorification of Nazism. Indulging neo-Nazis could lead to a chain reaction of socially dangerous processes among increasing numbers of people in Europe," the official warned.

The Crude Historical Distortion at the Heart of BBC's WWII Drama 'SS-GB'
In a special op-ed commentary for Sputnik Latvia, Latvian writer Jurgis Liepnieks stressed that those who attempt to present the legionnaires as heroes fighting Soviet occupation use faulty logic. Their logic, Liepnieks explained, seems to be that the Soviet Union, along with its American and British allies, attacked the Nazis, resulting in the downfall of the Third Reich. And instead of celebrating the victory over fascism, the Legionnaires and their supporters "celebrate the resistance to this victory."

"From their propaganda it logically follows that Latvia would have been better off if fascism was not defeated," the writer noted. "As a result, all those who supported the Nazis are deemed to have acted in the interests of Latvia, and as nothing less than the heroes of the Latvian people." Unfortunately, he added, this claim "is not being made by some marginal figures, but from the leadership of the parties that form the government."

However, Liepnieks pointed out that "if the two SS divisions were heroes of the Latvian people, so too are their commanders, and the generals, and in the end, Hitler himself as well, under whose orders these divisions operated." Accordingly, the writer asked whether Hitler, who also resisted the Red Army's offensive, should also be seen as a hero by those who would glorify the legionnaires. Moreover, he stressed, it is impossible to separate the Nazis' wartime efforts with the concentration camps and their crimes against humanity.

Ukrainian Revisionists Primp Fearsome Paramilitary Group for False Anniversary
Finally, Liepnieks suggested that the 'pseudo-historians' attempting to rehabilitate the Waffen SS legions would do well to recall Hitler's plans for Latvia in the event of a Nazi victory.

Janis Urbanowicz, member of a Latvian association protecting the rights of Latvian Russian-speakers, told Izvestia that all legislative initiatives against the march have failed so far because the government itself supports the events. "In addition, our NATO and EU partners, in all probability, do not see the revival of Nazism as a threat. On the contrary, they perceive them as an expression of freedom of speech."

For his part, Alexander Gaponenko, coordinator of the Union of Russian Communities in Latvia, told the newspaper that the situation is only getting worse, with more and more people supporting such events. "First of all, the march is taking place against a background of general anti-Russian hysteria in the West," he noted. "Secondly, blaming Moscow for everything and creating an imaginary enemy, the Latvian leadership is trying to remain in power, in spite of an enormous deterioration in the socio-economic situation in the country," Gaponenko added.