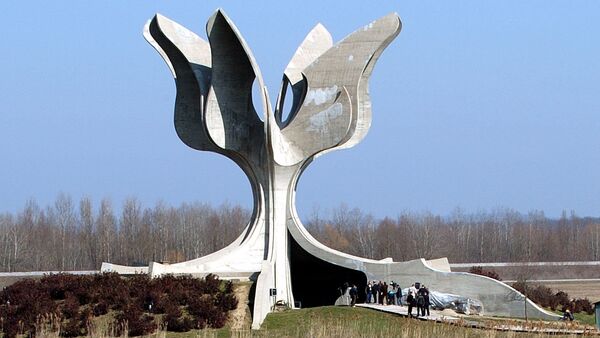 © AP Photo / Darko Bandic
Subscribe
Despite rejecting demands from Jews, Roma and Serbs that it return property stolen by its WWII-era fascist puppet government, Croatia was quick to reclaim the borders drawn by that regime during the 1990s Yugoslav conflict, Serbian lawyer Branislav Tapuskovic told Sputnik.

Croatia, Serbia Buying Advanced Weapons
On February 27, the Croatian Ministry of Foreign Affairs received a note from the US embassy on behalf of Jews, Roma and Serbs who filed a case in a Chicago court last May seeking $3.5 billion in compensation from the Croatian government.

The plaintiffs hold the Croatian state legally responsible for atrocities committed during the Independent State of Croatia (NDH), a fascist puppet state which was established by Germany and Italy in 1941 following the invasion and occupation of the Kingdom of Yugoslavia.

Under the leadership of Croatian Ustashe leader Ante Pavelic, the NDH murdered and persecuted Jews, Roma, Serbs and Croats opposed to the new government. The most notorious concentration camp was Jasenovac in central Croatia, where according to varying estimates, between 83,000 and 700,000 Serbs, Roma and Jews were murdered between 1941 and 1945.

The NDH was defeated in 1945 by the anti-fascist Yugoslav National Liberation Army, led by Josip Broz Tito, who went on to serve as Prime Minister and later President of Yugoslavia until his death in 1980.

Croatia, which has 60 days to respond to the note, maintains that it is not a successor state to the NDH. According to the Croatian Ministry of Foreign Affairs, there are no legal grounds for the lawsuit because the Republic of Croatia is founded on the Anti-Fascist Council for the National Liberation of Croatia (ZAVNOH), the highest organ of the anti-fascist movement in Croatia during the Second World War.

"The Ministry of Foreign Affairs stresses that Croatia is not a successor of the NDH, as explicitly stated in the preamble of the constitution of the Republic of Croatia," the ministry stated.

Serbian lawyer Branislav Tapuskovic told Sputnik that Croatia's position has an element of double standards.  He said that while Croatia is happy to now rely on the anti-fascist ZAVNOH, not the NDH, as its legal basis, this adherence was not demonstrated during its campaign for independence from Yugoslavia.

Croatian President Pays Tribute to Pro-Nazi Collaborators
During the Croatian army's Oluja (Storm) military campaign in 1995, 220,000 Croatian Serbs were forced to flee to neighboring Bosnia and Serbia from the Republic of Srpska Krajina, which was consequently subsumed into the Republic of Croatia.

Operation Storm is celebrated in Croatia as Victory Day. At last August's celebrations in the town of Knin, the former capital of Srpska Krajina, Croatian revelers played fascist songs and chanted fascist slogans dating back to the NDH.

"Croatia asserted that everything that happened from 1991-1995 was based on what existed under Ante Pavelic. Therefore, if any charges are to be brought they should be for genocide – there is no statute of limitations on such a clause."

"Now they are citing anti-fascism, but there were very few Croats in the partisan (anti-fascist) units. Now they are twisting things to seem as though they were almost the world's most important anti-fascists. This comes despite the NDH units fighting alongside fascist Germany on the eastern front," Tapuskovic said.

Zoran Zivanovic told Sputnik that states which recognized the NDH have also failed to take responsibility for doing so.

"The recognition of the NDH was a difficult question. But in any case, it should be mentioned that the NDH was recognized by at least 15 states which existed then in Europe and the world. It is difficult to imagine that a state has disappeared and nobody is responsible for its rights and obligations as a subject of international law. It would be logical if today's Croatia were responsible for all this, since if it isn't, then who is?" Zivanovic asked.

A year ago, Nicholas Dean of the US State Department's Office of Holocaust Issues visited Zagreb, where he met with Croatian President Kolinda Grabar-Kitarovic and members of the government to discuss the return of property stolen from Jews by the NDH regime.

Croatian Serbs in Uproar After War Veterans Unveil Memorial to Fascism
Successive Croatian governments have promised to speed up the process of returning property to Jews, but are wary of the precedent that sets for other groups persecuted under the IDS. Government sources told Croatia's Novi List newspaper that the country has received around 200 requests from the descendants of Croatian Jews living in Israel, worth about 40 million kuna ($5.8 million). A similar number of claims have been made by Jews living in the US.

According to Croatian law, restitution of property seized during World War II and the communist era is limited to individuals who were citizens of the country in 1996 when parliament passed the restitution law. Consequently, people who emigrated and obtained citizenship elsewhere prior to the law's passing are not entitled to restitution.

Earlier this month, the US State Department published a human rights report on Croatia which criticized Zagreb's reluctance to return assets to Jews as well as issues of human rights and press freedom.

"There have been no restitutions of Jewish communal property since 2014, although several such requests were pending," the State Department wrote.

000000
Popular comments
Like the "ukraine" (equally supported by Germany and the US) this is a fascist entity that have built it's nationhood and identity on treason and genocide against the very same Serbs that once gave them a language and a place to settle. Every 35-40 years or so when a new Empire arrives, it starts all over again adding atrocities and crimes against humanity to previous crimes, blood on blood. Respawned evil.