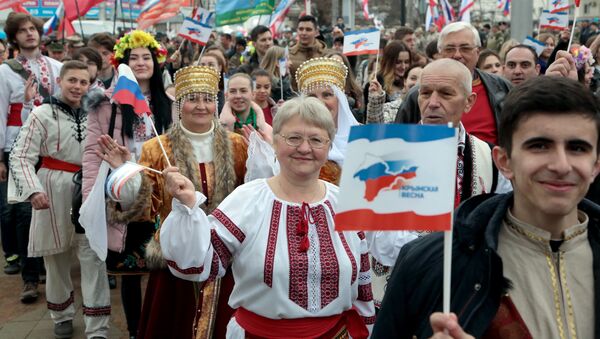 The people of Crimea have avoided "a bloody Nazi regime, a civil war, state terror, poverty and havoc" in Ukraine by rejoining with Russia, the republic's head said on the third anniversary of the reunification referendum.

SIMFEROPOL (Sputnik) — Republic of Crimea head Sergei Aksyonov explained on Thursday the benefits of reunification with Russia, including the peninsula avoiding civil war and poverty.

"Watching the events in Ukraine, we see clearly what we left behind three years ago. A bloody Nazi regime, a civil war, state terror, poverty and havoc," Aksyonov said during a ceremonial assembly dedicated to the third anniversary of the referendum that led to the peninsula’s reunification with Russia.

Aksyonov added that Ukraine in its current state could not exist for a long time.

"It’s a temporary transitional formation that will change under pressure of external and internal factors," Aksyonov said, adding that the "Anti-Russian hysteria will inevitably give way to pragmatic state approach."

World
Independent Poll Reveals Many Europeans, Americans See Crimea as Russian
The sooner it happens, the leader said, the better for Ukraine.

Crimea rejoined Russia after the referendum that was held on March 16, 2014. A total of 96.77 percent of the republic’s and 95.6 percent of Sevastopol’s voters spoke in favor of rejoining Russia. Kiev still considers Crimea an occupied territory.

The Russian authorities have repeatedly said that the people of Crimea have made their choice in a democratic vote in full accordance with international law and the UN Charter.