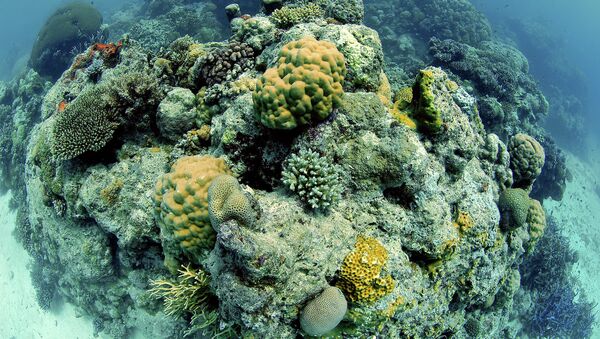 The Great Barrier Reef is on its deathbed, according to the cover of the March 15 edition of the journal Nature. Another coral bleaching event is occurring, the first time on record that two such events have occurred in successive years.

The paper was penned by marine biologists with the ARC Center of Excellence for Coral Reef Studies in Queensland. They used data from aerial, underwater and satellite surveillance devices.

"During 2015–2016, record temperatures triggered a pan-tropical episode of coral bleaching, the third global-scale event since mass bleaching was first documented in the 1980s… immediate global action to curb future warming is essential to secure a future for coral reefs," read the study.

Warming water has caused large sections of the reef to die over the last two decades, with the most recent bout of coral bleaching in 2016 affecting 91% of the massive reef.

The study lead was Professor Terry Hughes, a venerated marine biologist and ecologist with James Cook University. "This one [bleaching event] won't be as bad as 2016, but it could be more comparable to 1998 or 2002," he said. "It's an open question whether it's the third- or second-most severe."

Australia has taken measures to protect the Great Barrier Reef with the Reef 2050 plan, strictly regulating things like dredging and agricultural run-off over the coral. But Hughes claims that this has been ineffective, as the cause of the warming water is anthropogenic climate change intensifying weather phenomena.

"Globally what's been happening is the number of these bleaching events is going up and up, and the time interval between them is shrinking," said Hughes. "The end game if we don't deal with emissions would be annual bleaching every year."

Coral has a symbiotic relationship with a type of algae known as zooxanthella, which eats the coral's waste products. In stressful situations such as too-warm water temperatures, coral ejects its algae. As zooxanthella is what gives coral its splendid colors, this is known as coral bleaching.

A 2016 El Niño warming event had this exact effect on the Great Barrier Reef, warming the waters by several degrees and causing mass coral bleaching – 83 percent in some areas. While coral can recover from bleaching, some of it will eventually choke on its waste product and die.

"Climate change is not a future threat," Hughes said. "On the Great Barrier Reef, it's been happening for 18 years."