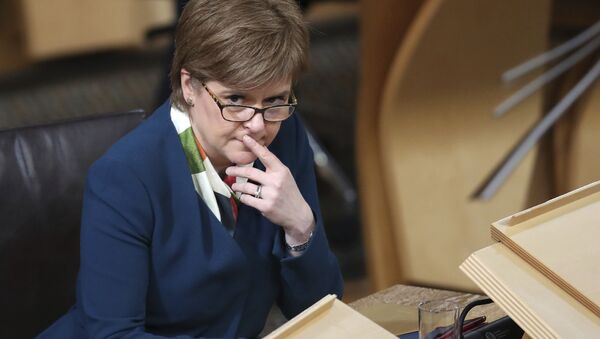 © AP Photo / Jane Barlow
Subscribe
UK Prime Minister Theresa May is set to trigger Article 50, the mechanism of the UK-EU ‘Brexit’ divorce. She might face surprise resistance, as Scotland is seeking a second referendum on independence from the UK. Brian Becker discussed the issue with John Wight, political analyst and host of Radio Sputnik’s Hard Facts program.

New Referendum on Scotland's Independence to 'Be Very Risky for UK Government'
The first Scotland independence referendum was held in 2014, while the UK was still part of the EU. At the time, over 55 percent of Scots voted to remain in the UK, as many feared that independence would jeopardize Scotland's EU-member status. Despite the apparent loss, the ruling Scottish nationalist party SNP declared that it would hold another referendum, should the status quo change significantly. And the status quo did, with the surprise win of the ‘Leave' vote during 2016 Brexit referendum. During that vote, the majority of Scots voted to ‘Remain' in the EU, however, their votes did not change the outcome. Now, as Prime Minister Theresa May is about to trigger Article 50, a codename for the official EU exit procedure, the First Minister of Scotland, Nicola Sturgeon, has announced that she will seek the approval of the Scottish Parliament to negotiate with the UK Government for a Section 30 order enabling a second independence referendum.

​"We could actually be looking not only at Britain being no longer the member of the EU, but also Scotland not being the member of the UK," said Wight, host of Radio Sputnik's Hard Facts. He noted that this will be the end of a union that has existed since 1707, when the Acts of the Union treaty, between England and Scotland, was signed.

After Tony Blair became UK Prime Minister in 1997, one of his first acts was the creation of the so-called Devolved Governments in Scotland, Wales and Ireland. According to Wight, the Devolved Governments are effectively local parliaments, with limited autonomy, including healthcare, housing, and some taxation, but excluding matters of national importance, such as foreign policy and defense. In the case of Scotland, the UK central government reserved the matter of Scottish independence for itself, under the "Section 30 of the Scotland Act." Scotland cannot declare itself independent from the UK, unless the UK central government agrees.

"Theresa May has a right constitutionally to block it and say no," Wight detailed. "But if she were to do that, she would make Scotland ungovernable, and will commit political suicide, because the support for Scottish independence will go through the roof."

Apparently, May and Sturgeon have entered a standoff, a situation that Wight described as only being ended by the person "who blinks first." If Sturgeon is to win, she must secure the referendum victory.

Brexit One Step Closer, Despite Legal and Scottish Challenges
According to Wight, Sturgeon will seek a deal under which Scotland would retain its privileges as a member of the EU, including access to the European market and European investments.

But to do that Sturgeon must first secure assurances from Brussels that Scotland's EU membership will be automatically extended, should it succeed with the independence referendum.

"But… the European Commission spokesperson just came out and said that would Scotland succeed [with the referendum], it will have to reapply like any other fugitive member state, and it will not have any special privileges. That will be a big impediment for the referendum vote, because without that assurance, people will wonder how Scotland is going to survive economically."

With all the ‘centrifugal' forces in the EU, one could imagine that Europe would go out of its way to provide privileges for fugitive member states, Wight observed.

Without no assurances from the EU, Sturgeon might win political points by using the independence referendum as a gesture of "pure democracy," claiming that her hand has been forced by the will of the people, and by the fundamentally-changed circumstances, letting people cast their vote even if she herself does not believe it is going to work, Wight noted.

Wight observed that Sturgeon is gambling on the success of this vote, otherwise she will likely have to resign in a similar fashion to the resignation of First Minister Alex Salmond after the failure of the 2014 Scottish independence vote.

000000
Popular comments
If they succeed at the polls and break away from the UK, will they have their cities bombed like the Ukraine has done with its break away territories, or will the US and European nations just sanction them like Crimea? Or perhaps they will blame the Russians on this one too.
Darrell R
15 March 2017, 04:42 GMT2
000000
Newsfeed
0
New firstOld first
loader
LIVE
Заголовок открываемого материала
Access to the chat has been blocked for violating the rules . You will be able to participate again through:∞. If you do not agree with the blocking, please use the feedback form
The discussion is closed. You can participate in the discussion within 24 hours after the publication of the article.
To participate in the discussion
log in or register
loader
Chats
Заголовок открываемого материала
Worldwide
InternationalEnglishEnglishMundoEspañolSpanish
Europe
DeutschlandDeutschGermanFranceFrançaisFrenchΕλλάδαΕλληνικάGreekItaliaItalianoItalianČeská republikaČeštinaCzechPolskaPolskiPolishСрбиjаСрпскиSerbianLatvijaLatviešuLatvianLietuvaLietuviųLithuanianMoldovaMoldoveneascăMoldavianБеларусьБеларускiBelarusian
Transcaucasia
ԱրմենիաՀայերենArmenianАҧсныАҧсышәалаAbkhazХуссар ИрыстонИронауОssetianსაქართველოქართულიGeorgianAzərbaycanАzərbaycancaAzerbaijani
Middle East
Sputnik عربيArabicArabicTürkiyeTürkçeTurkishSputnik ایرانPersianPersianSputnik افغانستانDariDari
Central Asia
ҚазақстанҚазақ тіліKazakhКыргызстанКыргызчаKyrgyzOʻzbekistonЎзбекчаUzbekТоҷикистонТоҷикӣTajik
East & Southeast Asia
Việt NamTiếng ViệtVietnamese日本日本語Japanese俄罗斯卫星通讯社中文（简体）Chinese (simplified)俄罗斯卫星通讯社中文（繁体）Chinese (traditional)
South America
BrasilPortuguêsPortuguese
NewsfeedBreaking
05:42 GMTBoJo Mulls Scrambling Army to Deliver Fuel Amid Panic Buying Triggered By HGV Driver Shortfall
05:30 GMTGerman Foreign Minister Wins Direct Mandate in Saarlouis District
05:25 GMTNorway's Post-COVID-19 Re-Opening Turns 'Life-Threatening' Amid Drunken Street Fights
05:24 GMTLive Outside Christian Democratic Union HQ After German Elections
04:36 GMTTrump's Georgia Rally: How Could 'Election Fraud' Card Play Out for Republicans in 2022 Midterms?
04:12 GMTNorth Korea's KCNA Labels US 'Most Heinous Human Rights Abuser'
03:00 GMTRome Says G20 Summit on Afghanistan Expected in Coming Weeks
02:51 GMTGermany's Social Democrats Win Election After Gaining 25.7% of Votes, Election Commission Reveals
02:24 GMTMerkel's District in Mecklenburg-Western Pomerania Falls Into SPD's Hands
02:17 GMTTexas Gov. Abbott Vows to Employ US Border Patrol Agents Whose Jobs Are 'At Risk' by Biden Admin
02:05 GMT'You F'd Up Your Presidency': Graham Reportedly Blasted Trump After He Refused to Concede Election
01:31 GMTRussian Embassy Calls on US Authorities to Ensure That Yaroshenko Gets Medical Assistance
00:57 GMTIAEA Claims Iran Failed to Fully Honor Agreement on Nuclear Monitoring Equipment
00:18 GMTYouTube Head Expects to Continue Work in Russia Despite Disagreements With Authorities
YesterdaySeoul Calls on Pyongyang to Restore Communication Lines Ahead of Possible Talks
YesterdayEuropean Commission Vice President Congratulates SPD With Strong Social Democratic Result
YesterdayAlternative for Germany to Continue Supporting Nord Stream 2 After Election - Co-Chairman
YesterdayMilitants in Aleppo Tried to Force Way From Turkish-Controlled Area - Russian Military
YesterdayGermans See No Use to Vote for CDU Without Merkel at Helm - Afd Politician
YesterdayGerman Conservatives Suffer Catastrophic Defeat in General Election – Senior Official