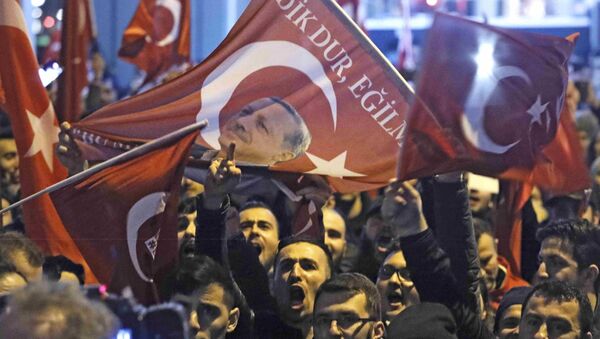 Ankara has been embroiled in a war of words with several European countries, notably Germany and the Netherlands, after senor Turkish ministers were prevented from taking part in political rallies across the continent. Should Brussels introduce an EU-wide ban on these events, it would violate international law, Dr. Begum Bulak told Radio Sputnik.

"I don't really believe that there is a great chance for an EU ban on Turkish rallies because this will [go against] all the established values and rights guaranteed under the European Convention on Human Rights and also weaken the EU under the Charter of Fundamental Rights, such as freedom of expression and freedom of peaceful assembly," she explained. "This will lead to further diplomatic tensions and again it will contradict the basis of international law."

Turkish President Recep Tayyip Erdogan and his supporters have staged rallies at home and abroad in a bid to convince voters to back proposed amendments to the constitution designed to grant sweeping powers to the presidency. Several European countries cancelled some of these events or prevented Turkish officials from delivering campaign speeches, much to Ankara's discontent.

Over the weekend Turkish Foreign Minister Mevlut Cavusoglu and Family Minister Fatma Betul Sayan Kaya were not allowed to address Turkish voters in the Netherlands, prompting Erdogan to accuse the Dutch of being "cowards, remnants of Nazis" and "fascists."

Turkey vs. Germany, Netherlands: 'It'll Be Difficult to Climb Down From This'
Dr. Bulak, Assistant Professor of Law at Istanbul-based Yeditepe University and a board member of the European Law Faculties Association, described Turkey and the Netherlands as "friendly and allied" countries that established diplomatic ties more than 400 years ago. She added that the recent diplomatic row marked the first time that the cordial bilateral relationship has been hit.

The expert further said that the European Union should serve as a mediator to help Turkey and the Netherlands resolve the issue.