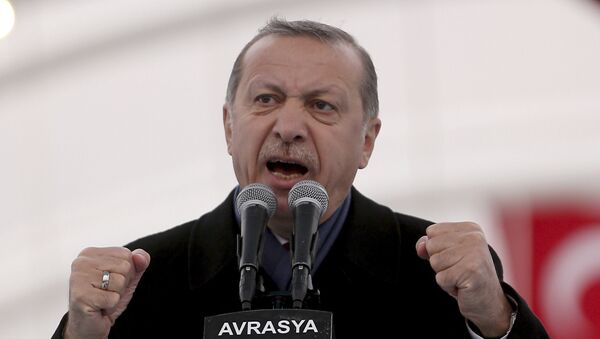 Turkish President Recep Tayyip Erdogan is likely to tear up the refugee deal, struck by the EU and Ankara back in March 2016, within a month, Russian academic Vladislav Belov told RIA Novosti. According to Belov, the move will play directly into Erdogan's hands.

EU Shows Solidarity With Netherlands in Dispute With Turkey - Tusk
President Recep Tayyip Erdogan may rip up the EU-Turkish refugee deal within a month, Vladislav Belov, Deputy Director of the RAS Institute for Europe, believes.

Speaking to RIA Novosti, Belov noted that if Erdogan withdraws from the migration agreement before the Turkish Constitutional referendum, Ankara won't suffer heavy losses, while the political consequences of the move are likely to play into the Turkish leader's hands.

The much discussed Turkish referendum on constitutional amendments, which would enhance the judiciary and legislative powers of the Turkish president, is scheduled for April 16.

Meanwhile, it appears that EU-Turkish relations are currently heading towards a crisis.

On Monday, Turkish Minister for EU Affairs Omer Celik called for the reconsideration of the Turkish-EU refugee deal.

"Turkey should reevaluate the issue of land crossings [of the refugee deal with the European Union]," Celik said, as cited by the Anadolu news agency.

EU-Wide Ban on Turkish Rallies 'Will Contradict the Basis of International Law'
For his part, Turkish Foreign Minister Mevlut Cavusoglu said Tuesday that the European Union is "falling apart."

"Do you know why? It is due to fear… The European Union is falling apart. We think the future of Europe will not be pleasant at all," he said, while criticizing the bloc over the recent tough measures against Turkish rallies in Europe.

"Unfortunately some countries of the European Union do not tolerate the rise of Turkey, and Germany is at the head. Germany relentlessly supports terrorism… Dear Merkel, you are supporting terrorists!" Erdogan said in an interview with the A Haber and ATV channels. 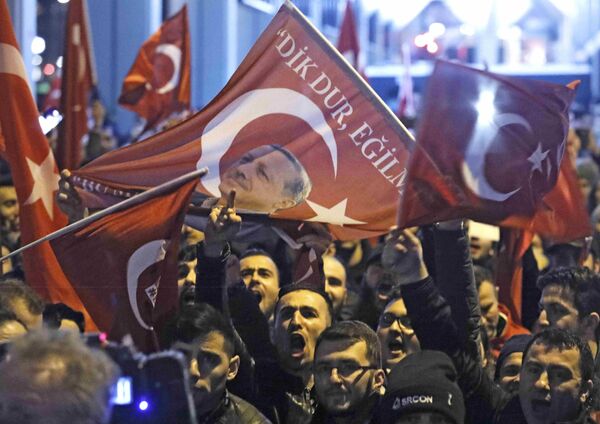 "As a matter of principle, Turkey was ready to tear the [EU-Turkish refugee] agreement up in June-July, 2016," Belov underscored.

Turkey Considering Economic Sanctions Against Netherlands Amid Tensions
"The reason behind this is a resolution passed by the Bundestag in early June, which condemned the crimes of the Ottoman Empire and recognized the Armenian genocide," he explained.

Needless to say, Ankara was outraged by Berlin's move and was ready to sink the deal; however, the July coup attempt had messed things up for the Turkish leadership, Belov recalled.

Now, amid the further deterioration of the EU-Turkish relationship it is quite possible that Erdogan will put his threat into action, he believes.

Moreover, according to the Russian academic, the recent downturn in EU-Turkish relations plays directly into Erdogan's hands.

"Erdogan is still playing on his domestic political field: the European Union is an unfriendly partner who interferes in Turkey's internal affairs, forbidding [Turkish] ministers and other politicians to speak at national venues [in EU countries]. And the deterioration in relations right now, a month before the referendum on expanding the powers of the president and constitutional reform, is playing into Erdogan's hands," Belov highlighted, adding that Turkey won't suffer severe financial losses as a result of its withdrawal from the agreement.

At the same time Erdogan understands that the EU has no alternative but to consider Ankara's interests, the academic remarked, stressing that Turkey is NATO's largest member state in the Middle East.

"So my forecast is that Turkey will rip the agreement up," Belov emphasized.

Back in March 2016, Brussels and Ankara struck the deal, under which Turkey vowed to take back all undocumented migrants arriving in the bloc through Turkey in exchange for relocating Syrian refugees stationed in Turkey on a one-for-one basis.

Since that time the agreement has repeatedly come under fierce criticism from both European and Turkish politicians.