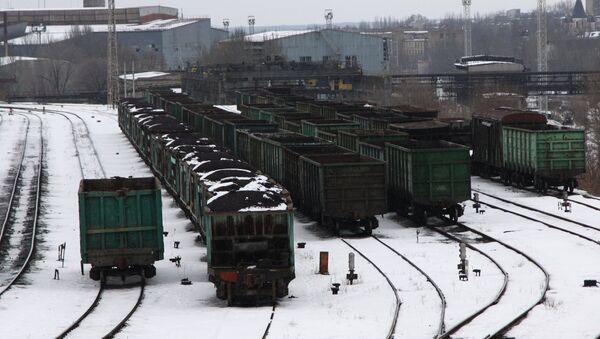 © Sputnik / Sergey Averin
/
Go to the mediabank
Subscribe
International
India
Africa
Kremlin spokesman Dmitry Peskov said Wednesday that he did not have any information on alleged shipments of coal from Ukraine southeastern region of Donbass to Russia.

MOSCOW (Sputnik) — On Tuesday, the leader of Ukraine's self-proclaimed Donetsk People's Republic (DPR), Alexander Zahkarchenko, said that over 90 wagon-loads of coal had been sent to Russia.

"No, unfortunately, I cannot [comment on that], because I do not have the information. This is a matter of economy, after all," Peskov told reporters.

When asked if the Kremlin would support such deliveries if they were proven to have been made, Peskov said that Moscow was making efforts to "relieve the suffering of the people" in the conflict-torn region in the east of Ukraine.

In 2014, the Donetsk and Lugansk regions in the southeast of Ukraine announced their independence from the new Ukrainian government. Despite tense relationship between Kiev and two self-proclaimed republics, the coal shipments from Donbass to the rest of Ukraine continued until they were interrupted in January by a group of former participants of Ukraine's military operation in Donbass, who claimed that such deliveries meant smuggling.

Last week, Ukrainian Prime Minister Volodymyr Groysman said that Ukraine was losing $73-147 million a month because of the trade blockade and added that the coal shortage damaged the metallurgy industry and further crippled the fragile national economy.