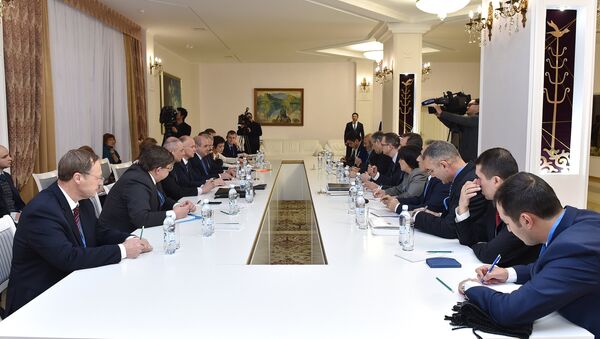 © Sputnik / Ilyas Omarov
/
Go to the photo bank
Subscribe
Representatives of the Syrian armed opposition will meet with the experts from the Syrian ceasefire guarantor states on the sidelines of the Astaba Syria peace talks, Kazakh Foreign Ministry spokesman Anuar Zhainakov said on Wednesday.

"Tonight we are expecting the arrival of the representatives of the Northern and Southern fronts who will hold consultations with the experts from the guarantor countries tomorrow morning to discuss the ceasefire," Zhainakov told reporters.

The spokesman added there was no information regarding the participation of the heads of the guarantor states’ delegations in the consultations, but stressed that the experts would "definitely" take part in the meeting, as well as the representatives of the two fronts.

There is no information regarding the final document either, the spokesman said.

"We are now discussing the documents that were mentioned, I can’t say anything regarding the final document," Zhainakov said.

"Today at 14.00 [08.00 GMT] there will be a joint press statement with the participation of the heads of delegations of Russia, Iran and Turkey, as well as of Kazakh Foreign Minister Kairat Abdrakhmanov," the spokesman told reporters.

The Russian delegation is headed by the special presidential envoy for Syria, Alexander Lavrentiev.

The third round of talks on Syrian settlement in the Kazakh capital officially kicked off on Tuesday.