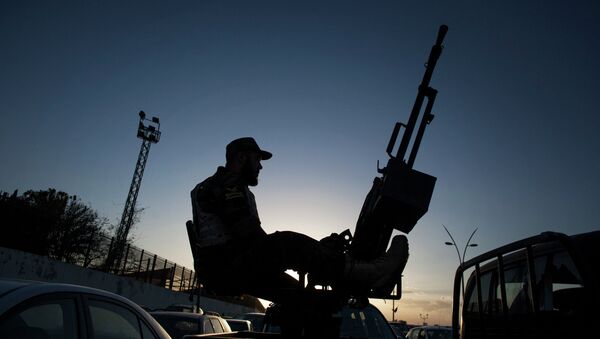 CAIRO (Sputnik) – Russia promised to assist the local authorities in the east of Libya in combating terrorism, he said.

"We asked the Russian government to help us in training of the armed forces, repairing of military equipment by Russian experts, as most of our officers were trained in Russia and many speak Russian, and they know how to use Russian equipment. We were promised an assistance in the fight against terrorism," Issa said.

"Commissions which will have to check and monitor the implementation of defense contracts reached with Russia during the rule of Muammar Gaddafi will be established. They will be implemented with the two sides’ good will," Issa said.

During the visit of Russian President Vladimir Putin to Libya in April 2008, Moscow and Tripoli signed a number of intergovernmental and commercial agreements, including the one to write off the Libyan debt amounting to $4.5 billion in exchange for contracts for Russian defense industry, though no details on the deals were made public.

Russia ready to take in new groups of Libyan wounded military men from the eastern part of the country for treatment, he said.

In early February, about 70 soldiers from the Libyan national army under command of Khalifa Haftar were sent to Russia for medical treatment.

"The friendly Russian government expressed its willingness to accept the wounded for treatment, and eventually it fulfilled the promise. If we need to send another group of wounded to Russia, they are ready to provide this humanitarian assistance," Isa said.

Moscow Wants Authority in Libya Who Could Combat Terrorism - Kremlin
Libya’s House of Representatives has sent an invitation to members of the defense and foreign affairs committees of the Russian State Duma to visit the country’s east, Saleh said.

"We have sent a letter to the Russian State Duma with an invitation of a range of members of the defense and foreign affairs committees to visit Libya (the government troop-controlled eastern part. We await their visit," Issa said.

According to the politician, Libyan lawmakers will soon visit Moscow.