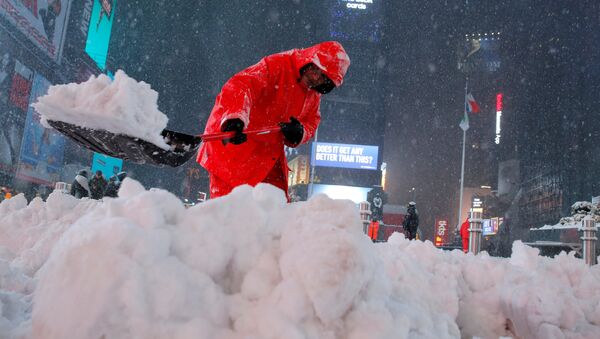 Merkel's Meeting With Trump Rescheduled to Friday Due to Snow Storm
NEW YORK (Sputnik) — On Monday, US National Weather Service issued a blizzard warning for the states of New York and New Jersey. Winter storm is projected to last until Tuesday night, and the affected areas may see up to 2 feet of snow.

And so it begins. Brooklyn, NY, 3 am. In 5 min. my footprints were almost gone. #StellaBlizzard #nyc pic.twitter.com/Hm3b3CwICj

Governor said on his Twitter earlier on Tuesday that 90 percent of flights in New York airports had been cancelled. According to the flightaware tracker, there are nearly 6,000 flight cancellations in the United States on Tuesday, with some 2,000 delayed flights.

🚨#StellaBlizzard: Over 90% of flights are cancelled & government, schools are closed. There is no reason to be on the roads. It's dangerous.