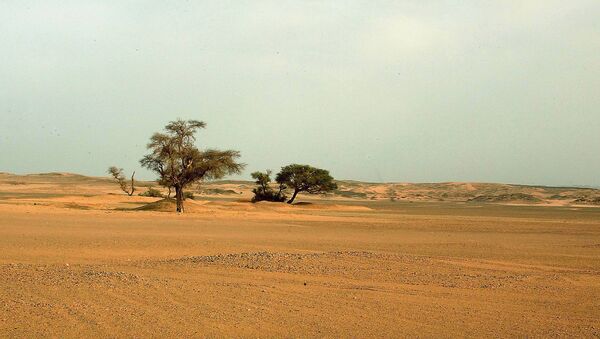 A new paper authored by archeologists with Seoul National University has suggested that the Sahara Desert, once green and wet, dried out as a result of the actions of ancient peoples. The spread of agriculture depleted the Sahara’s plant life and caused the region’s the shift to a desert biome, the paper claims.

Scientists have long known that, until fairly recently, the massive Sahara Desert was once verdant and teeming with life, until some 6,000 years ago, when rains ended and the desert became as it is today.

The exact cause of the meteorological shift has been a subject of much study in recent years, as earth scientists believe it could teach us much more about the history of the planet's climate, as well as the evolution of early human civilizations in the region. A 1997 paper suggested that the shift was a natural consequence of the withdrawal of the glaciers, and has been, until now, traditionally considered to be the most credible explanation.

Now, archaeologist David Wright has published a paper in Frontiers in Earth Science in which he argues that the cause of the Sahara's drying out was human activity in the region. Some 8,000 years ago, humanity had undergone the Neolithic Revolution, as a result of the invention of farming. Humans, building farms and domesticating animals, allowed livestock to eat large amounts of plants, which lowered the amount of Saharan vegetation.

Plants do more than make oxygen, as they also cool the Earth by absorbing sunlight via photosynthesis. A decrease in the number of plants over a large area can increase that region's albedo (the amount of sunlight that reflects off the surface of a planet). When the Sahara's albedo rose, the surrounding atmosphere changed, enough to cause the monsoons that provided water to become far less prevalent.

The drying of the Sahara caused plants to die, further increasing the albedo, further weakening the rains. This continued until early humans packed their bags and left for Egypt and Sumer, to start the first complex civilizations.

Wright formed his hypothesis by collecting archaeological evidence from ancient pastoral communities in the area. "There were lakes everywhere in the Sahara at this time, and they will have the records of the changing vegetation," he said to phys.org. "We need to drill down into these former lake beds to get the vegetation records, look at the archaeology, and see what people were doing there. It is very difficult to model the effect of vegetation on climate systems. It is our job as archaeologists and ecologists to go out and get the data, to help to make more sophisticated models."

"In East Asia there are long established theories of how Neolithic populations changed the landscape so profoundly that monsoons stopped penetrating so far inland," Wright said. He also mentioned that similar phenomena occurred elsewhere in the world in Europe, North America, and New Zealand.

If early humans could have such an enormous impact on the climate, it begs the question of what a vastly more numerous and advanced people, such as ours, could do to our planet. "The implications for how we change ecological systems have a direct impact on whether humans will be able to survive indefinitely in arid environments," Wright stated.