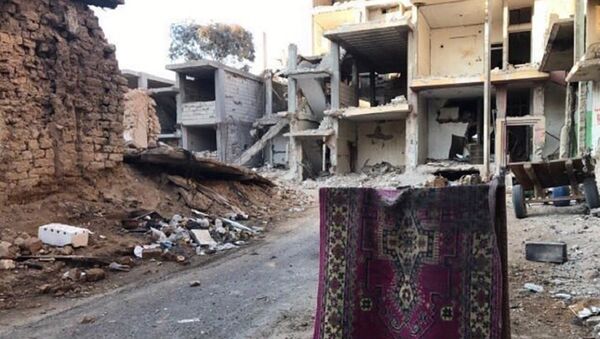 Steps are being taken to consolidate a three-month ceasefire in Syria throughout the country despite increasing violations, Turkey's Ambassador to Russia Huseyin Dirioz said Monday.

MOSCOW (Sputnik) — The nationwide Syrian ceasefire that came into force on December 30 is backed by Russia and Turkey; it has been holding up in general, despite continued reports of violations. The UN Security Council passed a resolution in December supporting the effort.

"Unfortunately, we are witnessing violations of the ceasefire, especially recently, but concrete steps are being taken to prevent violations throughout Syria," Dirioz said at a Rossiya Segodnya International Information Agency roundtable on Russian-Turkish ties.

The cooperation between Russia and Turkey contributes to the settlement of various regional problems, including Syrian crisis, he said.

"We see that the fruits of our cooperation and our interaction contribute to settlement of the existing regional problems, in particular, to the Syria crisis settlement."

Dirioz pointed out that the trilateral format of cooperation, comprising Russia, Turkey and Iran, was very important as each of these states had impact on the sides of the Syrian conflict.

"At the very beginning we managed to ensure a ceasefire in Aleppo due to this format, which means organization of evacuation of the people and prevention of a humanitarian catastrophe," Dirioz added.

Next Syria Talks in Astana Depend on Guarantors - Kazakh Foreign Minister
The Astana process on Syrian conflict settlement facilitates the UN-led negotiations in Geneva, whose ultimate aim is to find a political solution to the crisis, he said.

"All these measures contribute to the negotiation process under the aegis of the UN. The goal is not to replace the Geneva process, but to facilitate the process in Geneva with the final result of finding a political solution to this problem."

Ankara is pledging to do its best to seat the sides to the Syrian conflict at the negotiating table, Dirioz said.

"Of course, Turkey will do everything possible, everything that is in its power to seat the participants of the conflict at the negotiating table," Dirioz told reporters.

The envoy noted that Ankara is "doing everything to ensure the ceasefire and supports the negotiation process in every way, including in the Astana format."

Astana has already hosted two rounds of negotiations between Damascus and representatives of armed Syrian opposition groups on January 23-24 and on February 15-16. They were initiated by Russian President Vladimir Putin, who proposed establishing in the Kazakhstan capital a venue for the Syrian peace talks in addition to Geneva.