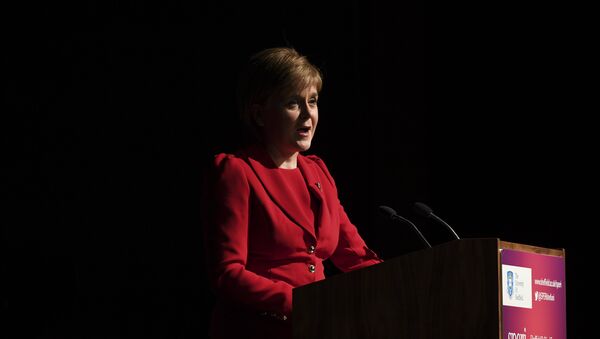 Nicola Sturgeon noted that she would take steps to ensure that the region has a choice on whether to remain a part of the United Kingdom or become independent amid Brexit.

"I will now take the steps necessary to make sure that Scotland will have a choice at the end of this process. A choice of whether to follow the UK to a hard Brexit — or to become an independent country, able to secure a real partnership of equals with the rest of the UK and our own relationship with Europe," Sturgeon said, as quoted by the Scottish National Party.

Choice on Scotland independence must be offered between next autumn and spring 2019, she added.

" I can confirm today that next week I will seek the authority of the Scottish Parliament to agree with the UK government the details of a section 30 order — the procedure that will enable the Scottish Parliament to legislate for an independence referendum … These considerations lead me to the conclusion that if Scotland is to have a real choice — when the terms of Brexit are known, but before it is too late to choose our own course — then that choice should be offered between the autumn of next year, 2018, and the spring of 2019," she said, as quoted by the SNP website.

Nicola Sturgeon also said she was not turning her back on further discussions with the UK government on the issue of Brexit if it were to agree to compromise, but said she did not believe that a compromise agreement was likely.

"The prime minister and her government have been given every opportunity to compromise but today as we stand for all we know on the eve of Article 50 being triggered not only is there no UK-wide agreement on the way ahead but the UK government has not moved even an inch in pursuit of compromise and agreement … Even at this late stage I am not turning my back on further discussions should the UK government change its mind and decide it is willing to agree to our compromise proposals … I cannot pretend to the Scottish people that the compromise agreement looks remotely likely," Sturgeon said speaking to reporters.

No Way Scotland Can Stay in EU If UK Exits the Bloc - Scottish Secretary Mundell
Even a good deal between the European Union and the United Kingdom on Brexit may be inferior to the membership of the European Single Market, Scottish First Minister Nicola Sturgeon said.

"I want the UK to get a good deal from the EU negotiations, this is clearly in Scotland’s interests as well as in the interests of our friends in other parts of the UK. But I am far from alone in fearing a bad deal or indeed no deal, nor am I alone in fearing that even a so-called good deal will be significantly inferior to the membership of the single market," Sturgeon said speaking to reporters.

Earlier it was reported, that a total of 50 percent of Scots would vote for independence if a new referendum took place in Scotland, according to the Ipsos MORI survey. Since the last poll, conducted six months ago, support for independence has increased by two percentage points.

The majority of Scots, 62 percent against 38 percent, voted to stay in the European Union at the 2016 nationwide referendum, however, the United Kingdom overall voted to leave. The Scottish National Party (SNP) has repeatedly called for a repeat independence referendum in the wake of the decision, citing fears of a "hard Brexit" strategy and lost access to the EU single market.

On March 9, Scottish First Minister Nicola Sturgeon said that the second half of 2018 would be a "common sense" time for holding a second Scottish independence referendum, as a UK-EU deal would be more clear by then.

The UK government views a second Scottish independence referendum as inevitable but will fight to delay the vote, local media reported on March 10.

000000
Popular comments
The point of "independence" is totally lost on Edinburgh if they plan to stay within the €USSR and NATO and Sturgeon might want to consult with the Crimeans on how to conduct a proper referendum.