Russia, Iran May Agree on Deliveries of Goods During Rouhani's Moscow Visit 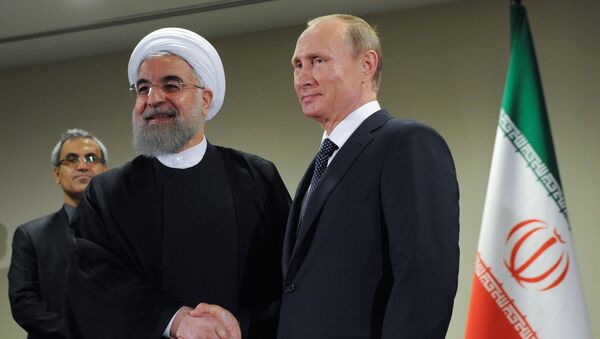 MOSCOW (Sputnik) — Iran's Minister of Communications and Information Technology Mahmoud Vaezi said in February after a meeting with Russian First Deputy Prime Minister Igor Shuvalov that Tehran hoped to sign a number of agreements with Moscow as part of Rouhani’s visit to Russia.

"This concerns the foreign trade activities – machine building products' supplies to Iran and the increase of supplies of food products to Russia," Lugansky said in an interview.

Lugansky added that the creation of the free trade zone between the Eurasian Economic Union (EAEU) and Iran would also be discussed during the president's visit.

"The matter is currently complicated by the Iranian side that does not want to agree on the list [of goods], as our product range is wider, while theirs is narrower," Lugansky stressed.

According to Lugansky, Iran should recognize the mutual interest of both countries within the framework of the free trade agreement. He referred to the Iran's intention to start exports of fruit and vegetables to Russia, which is a point of concern for Russia, as the duty-free importation of such products could create competition with local goods. Similarly, Iran fears that the import of a number of machine building products could provoke competition with more expensive local products.

Iran Ready to Discuss With Russia March 13 Oil Supplies in Exchange for Goods
Talks on the creation of the free trade zone between EAEU and Iran were held between Moscow and Tehran in February. After the negotiations, members of the EAEU prime ministerial council signed a directive ordering preparations for a temporary agreement on the establishment of the EAEU-Iran free trade zone.

Russian Foreign Minister Sergei Lavrov said in October 2016 that over the last two and a half years the turnover between Russia and Iran increased more than twice.