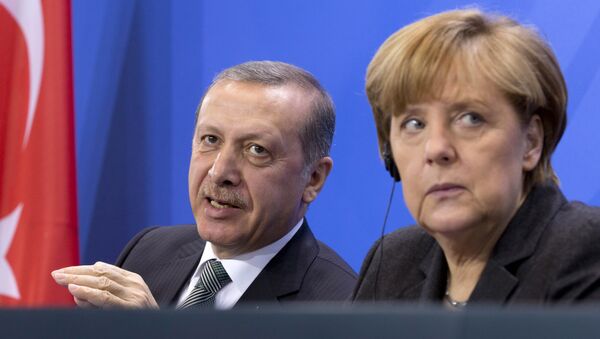 MOSCOW (Sputnik) — Earlier in the day, the German Foreign Ministry warned its nationals of potential security threats during the upcoming constitutional referendum in Turkey that would increase presidential powers over the legislature and the judiciary, scheduled for April 16.

“Unfortunately some countries of the European Union do not tolerate the rise of Turkey, and Germany is at the head. Germany relentlessly supports terrorism … Dear Merkel, you are supporting terrorists!” Erdogan said in Monday's interview with the A Haber and ATV channels.

Turkey had sent a list of organizations considered terrorist by Turkey with 4,500 files on their activities, he added, accusing Merkel of harboring terrorists in Germany without doing anything to correct the situation.

Merkel: 'It is Depressing and Sad to Hear' Comparison With Nazis From Erdogan
The president went on to slam Merkel for siding with the Netherlands in the scandal that erupted after Dutch authorities refused to let Turkish Foreign Minister Mevlut Cavusoglu's plane land in the country as well as stopping Family and Social Affairs Minister Fatma Betul Sayan Kaya from entering the Turkish consulate in Rotterdam. Both ministers had planned to hold a pre-referendum rally for Turkish expats at the consulate building.

German government speaker Steffen Seibert later ridiculed the accusations, stating that Merkel would not participate in any provocative exchanges.

Relations between Berlin and Ankara took a hit after the February arrest of Turkish-German journalist Deniz Yucel in Istanbul on suspicion of participation in a terror organization, and further deteriorated as Turkish President Recep Tayyip Erdogan drew parallel Sunday between the German authorities and Nazis when criticizing Berlin for banning Ankara’s campaign rallies on German soil ahead of the constitutional referendum.