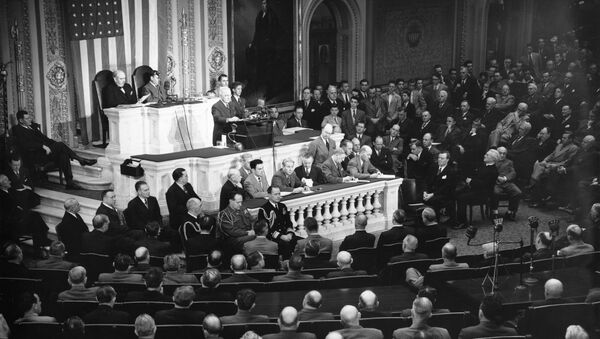 A Convenient Truth: 'Secret Hand of Moscow' Behind All US Elections
MOSCOW (Sputnik) — The direct motive behind his address was a statement by the UK government that it was no longer able to support Greece and Turkey financially. Washington was certain that the United Kingdom's withdrawal from the Eastern Mediterranean would strengthen the USSR’s positions in the region.

In Congress, Truman asked for military and economic aid for Greece and Turkey to save them from a supposed communist takeover. The president argued that a communist victory in the Greek civil war would threaten political stability in Turkey, which, in turn, would undermine political stability in the whole of the Middle East. Truman said that the United States must help "free peoples" in their fight against "totalitarian regimes," because the spread of authoritarianism "represented a threat to international peace and the national security of the United States."

US Establishment Forcing Trump to 'Copy Obama's Foreign Policy'
On May 15, 1947, US Congress passed a bill (signed into law on May 22, 1947) reflecting the main points of Truman’s address. "Aid" was made conditional on the Greek and Turkish governments agreeing to turn over full control of its rendering to special US missions, something that created an opportunity for US interference in these countries’ internal affairs.

Sharply critical of East European popular democracies, the Truman Doctrine proclaimed the United States’ leading role in the world and its responsibility for the state and development of the international community. It was clearly anti-Soviet and aimed to dislodge the USSR from the positions it took as a result of its defeat of Nazism in the Second World War.

The Truman Doctrine paved the way for US large-scale military aid to other countries that was used for interfering in their internal affairs and turning their territory into a strategic foothold, from which steady pressure was brought to bear on the USSR and its allies.

The Truman Doctrine marked the start of the Cold War that became America’s official foreign policy course for the subsequent decades, with the Marshall Plan and the establishment of NATO and other military blocs as its logical sequels.