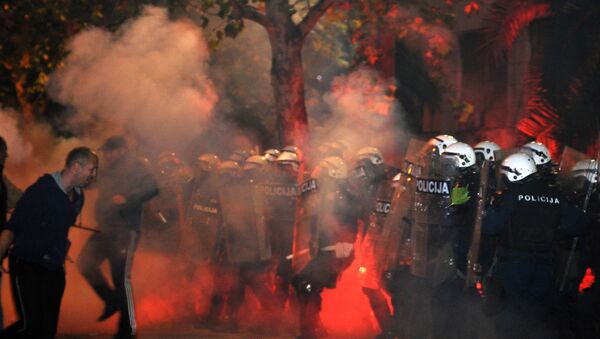 "First of all, we have no evidence that the Russian are actually involved in trying to undermine our democratic processes at the moment… There is no doubt that they've been up to all sorts of dirty tricks… You've seen what happened in Montenegro where there was an attempted coup, in a European state, and possibly even an attempted assassination of the leader of that state," Johnson told the ITV broadcaster.

On October 16, 2015, on the parliamentary elections day in Montenegro, 20 people were detained and 14 of them arrested for planning to conduct attacks, targeting both civilian population and high-ranking statesmen, and to seize the parliament's building. In November, a Montenegrin prosecutor was quoted by the media as alleging that "nationalists from Russia" planned to overthrow a government.

Montenegro Hopes 'Russian Coup Plot' Claims Will Speed NATO Accession
In December 2016, Montenegro put two Russian nationals — Vladimir Popov and Eduard Shirokov — and several Serbian nationals on the Interpol wanted list on suspicion of plotting the coup. The special prosecutor's office said it suspected Shirokov of planning the assassination of Djukanovic. According to media reports, the majority of the detainees have admitted their guilt in planning the coup. In February, The Telegraph newspaper reported that senior sources in the UK government suspected Russian intelligence of plotting the coup in Montenegro and the assassination of Djukanovic.

Johnson's comments come just days before his planned visit to Russia and the meeting with Russian Foreign Minister Sergey Lavrov.

Montenegro was invited to NATO in December 2015. In May 2016, NATO member states signed a protocol on Montenegro's accession to the alliance, which gives it the status of an observer at the meetings. To become a full-fledged bloc's partner, all 28 NATO countries must ratify the accession protocol to include the new member.