Obama 'is Coming': What Can the Losing Team Teach Next Generation of US Leaders? 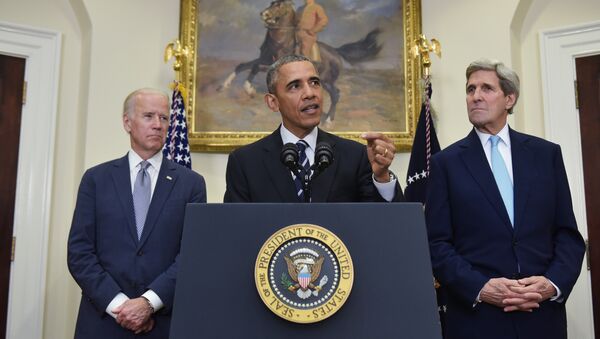 © AFP 2023 / MANDEL NGAN
Subscribe
International
India
Africa
Former United States President Barack Obama and his team are apparently not ready to retire. The old guard of the Democratic Party is intent on fostering the next generation of American leaders, raising doubts as to what they will be able to teach those who will determine the country's future, political analyst Kirill Bakeyev wrote for Sputnik.

"Mowing the lawn and growing flowers in the backyard of a $5.3 million home in an up-market neighborhood of Washington D.C. does not seem like an option for Obama and his cohort," political analyst Kirill Bakeyev asserted, referring to recent reports that Barack Obama is ready return to politics.

Earlier this year, former US Attorney General Eric Holder told reporters that Barack Obama "is coming" and "is ready to roll." He was referring to the ways in which Obama could help the National Democratic Redistricting Committee (NDRC), an organization affiliated with the Democratic Party which is meant to impact the 2021 redistricting process.

Trump's 'Industrial Egoism' May Leave State Department in Hawkish Hands
According to Holder who chairs NDRC, Obama "will be a more visible part of the effort." His involvement could include fundraising and interacting with lawmakers at the state level.

Michael Sainato suggested that the news on Obama's imminent return to public politics indicated that the Democratic Party does not plan to reform itself.

"Instead, they are doubling down on the status quo with the announcement that Obama is nearly ready to go back into politics," he wrote for the Observer. "The solutions for the Democratic Party won't come from the president who failed to keep his promises of hope and change while Democrats suffered drastic losses in Congress and state legislatures across the country."

Meanwhile, Yale University unveiled that former US Secretary of State John Kerry was expected to return to his alma mater to oversee the Kerry Initiative, described as "an interdisciplinary program that will tackle pressing global challenges through teaching, research and international dialogue."

Attorney General Sessions Asks 46 Obama-Appointed US Attorneys to Resign
The initiative will apparently focus on major global issues, including failed and failing states; the challenge of authoritarian populism; rising sectarianism and violent extremism; climate change and other environmental threats; as well as capacity building, global economic opportunity and development.

For his part, former Vice President Joe Biden will head the newly-established Penn Biden Center for Diplomacy and Global Engagement at the University of Pennsylvania and serve as the founding chair of the Biden Institute at the University of Delaware. The former will focus on diplomacy, foreign policy and national security, while the latter is expected to be engaged in developing public policy solutions on issues ranging from economic reform and environmental sustainability to civil rights, criminal justice, women's rights and more.

Biden's role as Benjamin Franklin Presidential Practice Professor at the University of Pennsylvania is ambiguous, with "administrators, professors and politically minded students alike … still confused about the nature of his role" at Penn, according to the Daily Pennsylvanian.

"The old guard of the Democratic Party will ostensibly take on raising the next generation of American politicians. But what can the defeated party teach the leaders of the future?" Bakeyev asked.