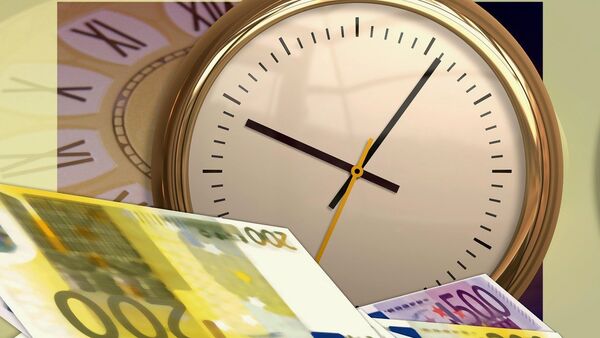 The European Central Bank might increase its base interest rates before this September due to the recent economic acceleration and tighter borrowing costs in the US affecting the international capital flows.

Kristian Rouz – The European Central Bank (ECB), currently holding its base borrowing costs at zero, and enforcing negative rates regime (NIRP) no certain types of assets, rattled the markets having allegedly discussed an increase in interest rates during its March 9 meeting.

ECB to Keep Pumping Money While Greek , Italian Woes Threaten Eurozone
The increase in rates, likely advocated by the German representatives, could further exacerbate the North-South divide within the Eurozone, but is deemed necessary as the US Fed are expected to undertake three rate hikes this year.

The increases in US borrowing costs put the US in a more advantageous position regarding the international capital flows, as investors tend to put their money into higher-yielding assets. Meanwhile, the improvements in the economies of the Eurozone’s North, where inflation is near the 2-percent target and growth is relatively solid, call for higher borrowing costs. The European South, however, has long been favouring looser monetary conditions due to banking sector turmoil in Italy and debt woes in Greece, most prominently.

The ECB’s quantitative easing (QE, or bond-buying) programme ends in the second half of this year, and the Governing Council officials allegedly discussed raising interest rates before the QE expires, which puts a rate hike perspective somewhere between now and likely September.

"I have no idea whether the reports are correct or not but it shows where we are," Axel Merk of the Palo Alto, CA-based Merk Hard Currency Fund said. "It shows that the (ECB) discussions are leaning towards 'How do we get out of QE?'… There's been a fundamental shift, but it's a fundamental shift that's been gradually sinking in."

Italy Faces Banking Crisis as ECB Denies Help
Higher borrowing costs mean a dearer euro and higher investment appeal of the Eurozone economy, which is now jeopardised by several risk factors, including Brexit, the prospects of either France or Italy or both leaving the euro this year, and growth discrepancies between the industrialised and export-driven North and the indebted South.

The Eurozone has been mired in economic struggle, high unemployment, and lingering threat of disinflation since the 2011 debt crisis, but the recent recovery gives the monetary authorities a mandate to normalise policy. The increases in US borrowing costs and the expected rise of the dollar against the euro are also contributing to the expectations the ECB would ‘mirror’ the US monetary policy in order to maintain the status quo in the Eurozone’s and the US positioning in international capital flows and investment.

"Part of the story is that they’re not happy with negative interest rates,” Nick Kounis of Amsterdam-based ABN Amro Bank NV said. “I can understand why they would want to do it; negative rates can have adverse effects. Whether they’re in a position to do it is a different question — they’re still not convinced whether they can meet their inflation goal."

US Fed Signals Rate Hikes Will Happen Sooner, in Line With Trump's Agenda
Negative rates on bank deposits are affecting most European banks, impairing their profits. Whilst the NIRP was supposed to boost bank lending and subsequently stimulate domestic investment and economic recovery, the positive effects of NIRP have worn out, and the banking sector needs a break in the form of higher profits. Due to the NIRP, the banks can’t charge interest on their customers, which in fact results in less active corporate and household lending.

With NIRP poised to end, broader borrowing costs should essentially increase, if inflation allows for such an ambitious policy decision.

"We have a generally better economic climate and that somehow needs to be reflected," Anatoli Annenkov of the London branch of Societe Generale said. "They’re coming to the point where they want to get rid of non-standard policy measures. If they do this first, it potentially allows them to do QE a bit longer."

As the reports of the ECB officials discussing raising rates surfaced, the euro rose against both the dollar and the pound sterling, also supported by the ECB’s upward revision of its growth and inflation targets for 2018.

The US Fed ended their own QE in the autumn of 2014, and have since raised rates twice, in December 2015 and December 2016. The ECB might resort to this experience as blueprint for their own way out of the unconventional policies conundrum, however, there is little information at this point to determine the exact steps the Eurozone regulator would undertake. The ECB will likely try and strike a balance between the political and policy risks this year, whilst it is apparently growing more confident of the economy.

Analysts of BNP Paribas are expecting a deposit rate increase in September, effectively ending the NIRP about the same time the QE ends. A broader rate hike is not currently expected until 2018, but the likely escalation of the French and Italian risks in the coming months might render the Frankfurt-based regulator more decisive on rates.