'We Must Have Control of the Sea': Ex-NATO Chiefs Urge North Atlantic Build-Up 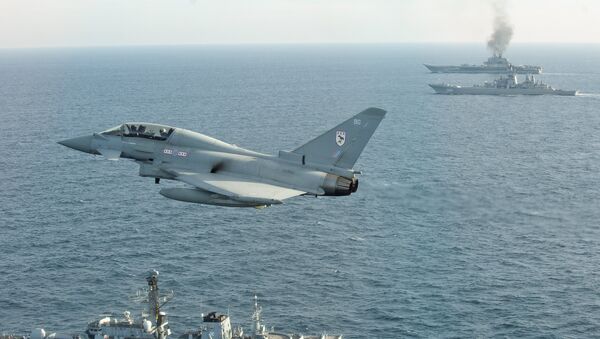 © The UK Ministry of defence
/
Go to the photo bank
Subscribe
A new report calling on NATO to increase its presence in the North Atlantic Ocean in response to Russia's growing military strength is a baseless attempt to spread fear, Nikolai Topornin told Radio Sputnik.

The report, which contains chapters written by former NATO commanders James Stavridis and Philip Breedlove, recommends that NATO extend its naval presence in the North Atlantic too.

"As we look to the future we need to think more broadly and to re-emphasize the maritime domain. NATO must put the North Atlantic Ocean back on its agenda. We must have command of the sea," Breedlove wrote.

Breedlove, a four-star United States Air Force General who retired as Supreme Allied Commander of NATO forces in Europe last year, is a known war hawk. He has previously called for NATO to increase its military presence in Europe and for the US to supply lethal weapons to Kiev to use in eastern Ukraine.

Nikolai Topornin, an associate professor of European Law at the Russian Foreign Ministry's Moscow State Institute of International Relations, told Radio Sputnik that the latest report is another attempt to whip up anti-Russian hysteria with the aim of increasing NATO's naval presence.

Germany Protests Russian Missiles, Forgets About NATO Buildup on Russian Borders
"All work is paid for, and this report is no exception. How objective it is and the competency of the person who prepared it is another issue. It's one thing if he has tried to give an objective picture, but if he wanted to spread some fear and think up some stories, that's quite another and it seems to me that in this case, it's most likely the second one," Topornin said.

"The man has simply set himself the task of telling everyone that Russia was violating some kind of strategic standards, is strengthening its military presence, including naval and may constitute some kind of threat," Topornin told Radio Sputnik.

An increased naval presence in the North Atlantic Ocean would add to NATO's increased land presence at Russia's western borders.

In January, the US transferred its largest contingent of troops and military equipment to Eastern Europe since the end of the Cold War.

In addition, on February 16 NATO defense chiefs approved the intensification of training exercises and drills in the Black Sea and greater co-ordination between national navies and the permanent NATO task force in the region.