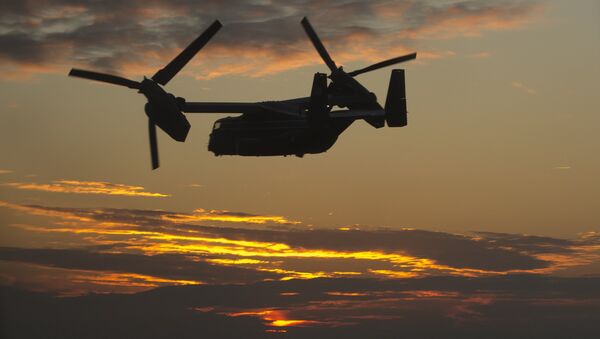 US Resumes Osprey Aircraft Flights From Okinawa Base in January
WASHINGTON (Sputnik) — The US Navy awarded a $12.2 million contract to repair constant frequency generators used on the V-22 Osprey aircraft in support of the Marines and the Air Force, the Department of Defense said in a press release.

“Hamilton Sundstrand [of] Rockford, Illinois is being awarded [a] $12.2 million… order… for the repair of the constant frequency generator used on the V-22 aircraft in support of both MV-22 (Marines) and CV-22,” the release stated on Thursday.

The V-22 Osprey flies farther and faster than traditional helicopters, overcoming traditional combat theater challenges. Its high speeds allow for rapid rescue of downed pilots and its longer range would allow for seamless fleet repositioning in a prospective Asia-Pacific theater.