Four Russians Were on Board Helicopter That Crashed Near Istanbul - Reports 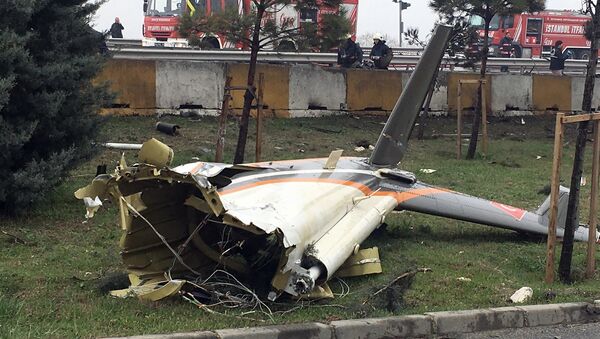 © AP Photo / Cem Bakırcı/Depo
Subscribe
International
India
Africa
At least four Russian nationals were on board of a helicopter that crashed in an Istanbul suburb on Friday, turkish NTV channel reports.

A fire-fighting helicopter has crashed near Istanbul on Friday. According to the local media reports, the incident occurred due to a strong fog.

As a result, five people died, the head of the Buyukcekmece suburb said Friday.

"There is preliminary information that five bodies have been found. The helicopter fell directly on the road, there were no cars on the road. The fog is strong, absolutely nothing is visible," Mayor Hasan Akgun said in a broadcast on Turkey's NTV.

​Akgun, hovewer, did not confirm media reports that the crashed aircraft was a firefighting helicopter. Local reports claimed the possible cause could have been its crash with a turned-off transmission tower caused by poor visibility.

Later reports suggested there were foreigners on board the helicopter.

​A Sikorsky S-76 helicopter, registration number TC-HEZ, departed Istanbul Ataturk Airport and crashed near Büyükçekmej at 11:21 A.M. local time, the news agency DHA reported. According to DHA, there were 7 people aboard: 2 crew members and 5 passengers.

One of the passengers was Salim Özen, the CEO of Vitra Russia, a division of Eczacıbaşı Group, DHA reported. He was flying with four Russian partners from Istanbul airport to a meeting which was to take place in the Turkish city of Bozüyük near the Sea of Marmara.

Meanwhile, Russia's Embassy in Ankara has no information on Russian nationals who could have been on board a helicopter that crashed near Istanbul in Turkey, leading to five deaths, an embassy spokeswoman told Sputnik.

"There was no official information that there were Russian citizens among the dead. The Russian Consulate General in Istanbul is specifying the circumstances," Irina Kasimova said.